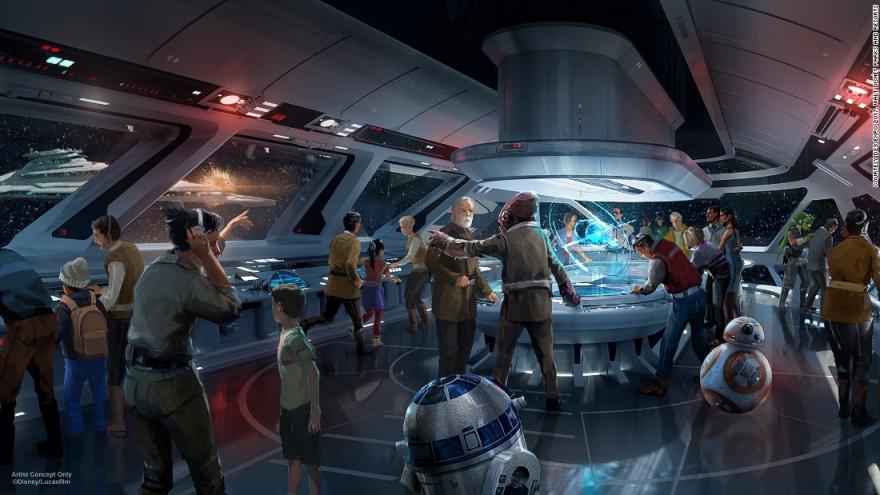 (CNN) — Hold on to your light sabers! Disney has unveiled a new way to experience the universe of Jedi, droids and wookiees -- an immersive "Star Wars"-themed hotel.

Due to open as part of the hotly anticipated "Star Wars" land being added to Disney World in Orlando, the hotel will allow guests to go on their own adventures on a self-contained spaceship.

Tantalizing images of the hotel, complete with windows that show galactic views, were released as Bob Chapek, chairman of Walt Disney Parks and Resorts, revealed a slew of new attractions.

Among revelations is the name for Disney's new expansions in Florida and California: Star Wars: Galaxy's Edge.

At the D23 Expo 2017 -- a biennial fan event showcasing the best of the Disney empire -- the company showcased a detailed model of Galaxy's Edge.

"To say we are excited for the Star Wars-themed lands to open in 2019 is an understatement," Chapek said in a statement. "All along, we have said this will be game-changing, and through the model we can begin to see how truly epic these immersive new worlds will be."

The new hotel will allow guests to live out a Star Wars fantasy.

"From the second you arrive, you will become a part of a Star Wars story," says Chapek in a statement on the Disney Parks blog.

"You'll immediately become a citizen of the galaxy and experience all that entails, including dressing up in the proper attire," Chapek says.

The emphasis is on total immersion -- guests will interact with characters, go on adventures and explore the galaxy. "It is 100% immersive, and the story will touch every single minute of your day, and it will culminate in a unique journey for every person who visits," adds Chapek.

Visitors to Galaxy's Edge will also get the chance to pilot the Millennium Falcon -- and join battles.