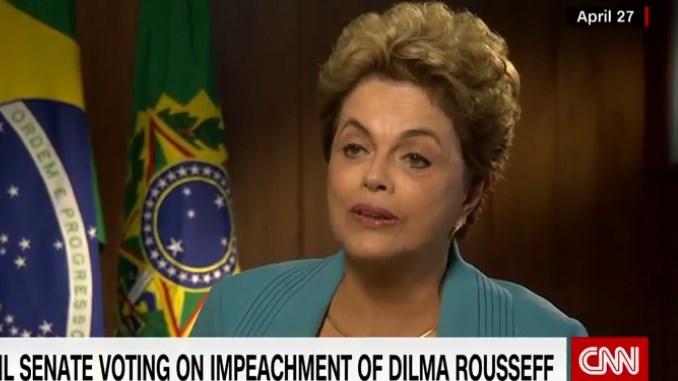 (CNN)Brazilian President Dilma Rousseff must step aside immediately following a vote in the upper house to move forward with impeachment proceedings stemming from corruption allegations against the country's first female president.

Fifty-five of the 81 members of the upper house voted in favor of the motion early Thursday, with 22 voting against.

Speaking through the night, 71 of the chamber's members spoke ahead of the electronic vote, which took hours and ended, ultimately, in Rousseff's temporary removal from office.She will now face an impeachment trial and, for the duration of that process -- and for as long as 180 days -- will be suspended from office.

Vice President Michel Temer will assume the presidency for the time that Rousseff is obliged to step aside.The past few months have been a roller coaster for the embattled leader, who has been at the center of a battle for her impeachment, including procedural and legal appeals to annul the vote in the legislature.

In the next few hours, Sen. Vicentinho Alves will deliver the senate's decision to Rousseff at her presidential office.

There, she will host former president and her predecessor Luiz Inacio Lula da Silva, universally known as Lula, along with ministers and other authorities, to sign a notification telling her she needs to step aside for the duration of the impeachment trial.

She will then address the media, and vacate the presidential office. Following that, she will return to the presidential residence, Palacio da Alvorada.As the senators put forward their views, protesters in the capital Brasilia and other cities demonstrated for and against the proceedings. Some, like the protest in front of Congress in Brasilia got out of hand, prompting authorities to disperse the crowds.

"It is revolting, we are here defending our democracy, and those yes-men spray us with tear gas, they are cowards," one protester, Celma Pereira, a teacher, said.The senators were each given 15 minutes to speak, with a buzzer indicating when their time was up. Seventy-one of the house's 81 members took the opportunity to have their voices heard.

Former President Fernando Collor de Mello, himself impeached by the senate in 1992, said he feels the country has "regressed politically."

His colleague, Armando Monteiro, said that the impeachment was politically motivated and will set a dangerous precedence.

A sweeping investigation into a multimillion-dollar kickback scheme at the state-run oil company Petrobras embroiled dozens of the country's leading businessmen and politicians. While she isn't accused directly of profiting, Rousseff was the chairwoman of Petrobras during many of the years of the alleged corruption.

In December, a bid to impeach Rousseff was launched by the then-speaker of the lower house of Congress, Eduardo Cunha, who argued that the President was guilty of breaking budgetary laws by borrowing from state banks to cover a shortfall in the deficit and pay for social programs in the run-up to her 2014 re-election.She has been also blamed for the worst recession since the 1930s, now in its second year.

Sen. Waldemir Moka told the upper house during his allotted time that, if the impeachment trial is successful,the future president will assume a government with a 250 billion Brazilian Real debt ($72.5 billion) according to conservative projections, with the possibility of being up to 600 billion Real ($174 billion).The spell on the sidelines puts Rousseff out of commission when her country hosts the Olympics in August -- a showcase event that she's worked on since the beginning of the bid process -- and leaves her battling to save her political future and finish out her term.

When the investigation ends -- which could be as late as November -- the process returns to a special Senate committee.

At that point, Rousseff will have 20 days to present her case. Following that, the committee would vote on a final determination and then present it for a vote in the full Senate.

It will take a two-thirds majority to remove the President from office.