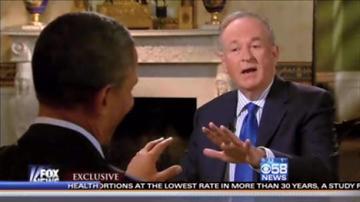 CBS NEWS -- Before the Super Bowl began, President Barack Obama had a lively and sometimes contentious interview with Bill O'Reilly.

The annual pre-Super Bowl interview turned into a showdown as the Fox News host drilled the president on topics that Republicans frequently use to criticize the administration.

\"I want to get some things on record.\"

O'REILLY:  \"Was it the biggest mistake of your presidency to tell people over and over again if you like your health insurance you can keep it?\"

OBAMA:  \"Oh Bill you've got a long list of my mistakes in my presidency.\"

OBAMA:  \"This is one regret and I said I regretted.\"

Then the focus shifted to Benghazi and when the president knew terrorists carried out the deadly attack on the American Consulate.

O'REILLY:  \"Your detractors believe that you did not tell the world it was a terror attack because your campaign didn't want that out.\"

OBAMA:  \"They believe it because folks like you are telling them that.\"

O'REILLY:  \"I am asking if you were told it was a terror attack.\"

OBAMA:  \"And what I'm saying is that is inaccurate.  We revealed to the American people exactly what we understood at the time.\"

The final battle centered around the IRS after an office in Cincinnati appeared to target conservative groups applying for tax exempt status.

OBAMA:  \"There were some boneheaded decisions out of...

OBAMA:  \"No mass corruption, not even a smidgen of corruption.\"

While the interview focused on problems the Obama administration has faced, the president says he tries not to focus on the fumbles but on the next play.