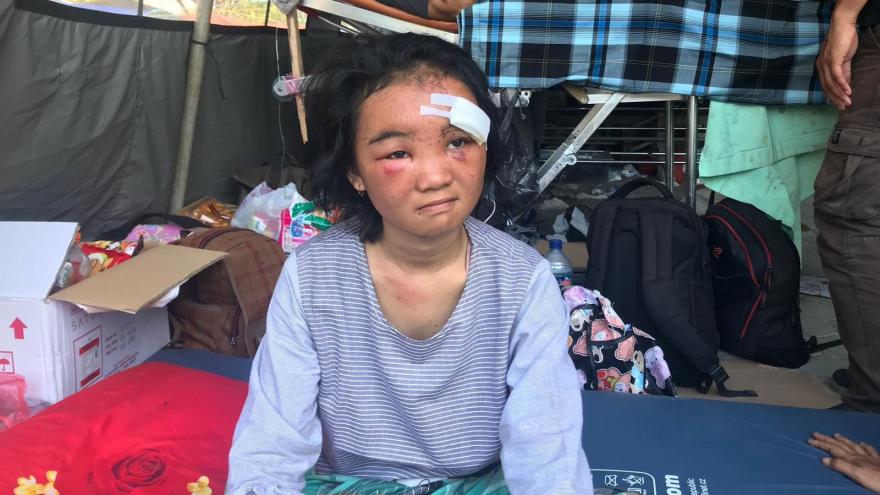 PALU, Indonesia (CBSNews) -- Indonesian authorities were still desperately working on Tuesday to get food and other aid to victims of the devastating earthquake and tsunami which struck last Friday. Drone video has revealed the widespread destruction from the twin natural disasters, and the confirmed death toll reached almost 1,300 on Tuesday morning.

That number was still expected to climb as some of the hardest-hit areas are reached, and as CBS News correspondent Ben Tracy reports, more than 60,000 people have been forced from their homes.

Tracy was in the hard-hit town of Palu on Tuesday where rescuers were frantically digging through mud and rubble, searching for survivors. The situation in Palu is desperate. There is very little water, electricity or gas. As the town digs a mass grave for victims, survivors have resorted to looting stores for food and thousands are flocking to the damaged airport, hoping to get out.

When Tracy and his team arrived in Palu on Tuesday, they saw thousands of people camped out on the airport tarmac, desperately hoping that one of the cargo planes bringing in aid will deliver them from the hell that is now their home.

Tracy spoke to one woman who had been waiting outside with her 8-month-old baby girl for three days. She said she was finally expecting to board a plane on Tuesday, and she was "absolutely delighted and thankful to God" for it.

As Tracy asked her how her family was coping, the ground started shaking as another aftershock hit the battered region.

For the beleaguered residents who have just been through a nightmare, it is extremely frightening to have the ground start shaking again -- especially as they sit under a structure at the airport to try and shelter from the sun in the 90 degree heat.

It has been four days since the earth violently shook when the massive 7.5-magnitude quake struck, triggering a tsunami nearly 20-feet-tall which smashed right into Palu.

Heavy machinery has finally arrived to aid the rescue effort, said Tracy, but it was quickly turning into a grim recovery operation, rather than a rescue mission.

In one part of Palu, the earthquake shook the ground so violently it basically turned the soil into quicksand and swallowed everything on top of it. Rescue workers told Tracy that they believed as many as 70 bodies could be buried under the rubble at the one site alone.

But there are still signs of hope. On Monday night a 38-year-old man was pulled alive from the rubble of a building in Palu. He was able to talk to the rescuers who spent three hours extricating him from the huge slabs of concrete.

Sadly that kind of story was becoming increasingly rare by Tuesday. One rescue worker showed Tracy the big sheet of white paper on a wall, where they note the victims found in their small search area. On Tuesday they found seven more bodies.