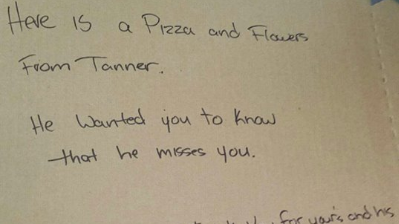 WEST ALLIS - Pizza delivery places receive a variety of requests from customers. Sometimes, it's people modifying an order. Other times, it's people asking for their food to be delivered a certain way. One local pizza place received a heartwarming request that was unlike the rest.

A soldier currently deployed in the middle east called into the Pizza Hut in West Allis to make a request to surprise his girlfriend. He asked for a delivery driver to drop off a pizza and flowers to her.

The workers left a note on the lid of the box. It read, "Paige, Here is a pizza and flowers from Tanner. He wanted you to know that he misses you. Thank you for yours and his sacrifice, Your Pizza Hut Team."