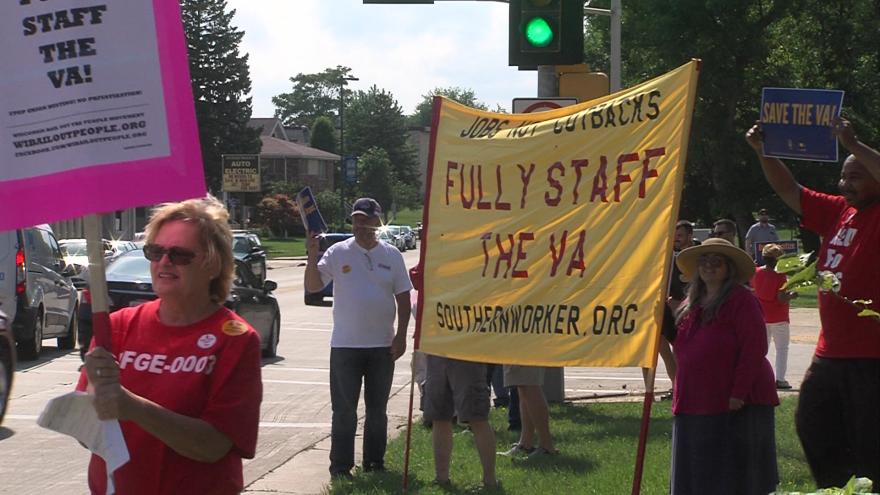 "We feel that we are being treated worse than immigrants," said Federal Workers Leader Dorothy James. "It is the design of this administration to eliminate unions altogether."

The union representing those workers has been negotiating a new contract with the federal government which would cover 260,000 VA workers around the country.

Demonstrators claim the VA is trying to outsource veterans' care to eliminate protection for whistle-blowers and to strip workers of their basic rights.

The Veterans Administration responded to Tuesday's rally and accused the union representing VA workers of refusing to accept "common-sense improvements."

The VA says the union has consistently fought for the status quo and opposed attempts to make VA work better for veterans and their families. See the full statement from the VA below:

Whether through its condemnation of the MISSION Act or its efforts to repeal the VA Accountability and Whistleblower Protection Act, AFGE has consistently fought for the status quo and opposed attempts to make VA work better for Veterans and their families. Now AFGE is taking the same approach with its refusal to accept commonsense improvements to its collective bargaining agreement.

Here are the facts: VA is working to renegotiate its contract with AFGE in order to improve medical care, customer service, and staff accountability while maximizing value for Veterans and taxpayers. VA’s proposals include a number of significant changes, including:

As Sec. Wilkie said: “It’s time for a reset in VA’s approach to labor-management relations. A reluctance to challenge the status quo produced the current agreement, which includes many benefits that favor the union rather than the Veterans we are charged with serving. With VA facing thousands of vacancies, these proposals could add more than one million man-hours per year back into our work force – a vital influx of resources that would make an almost immediate difference for Veterans and the employees who care for them. These proposals make clear that service to Veterans must come first in all that we do, and I look forward to working with AFGE to ensure we achieve that goal.”