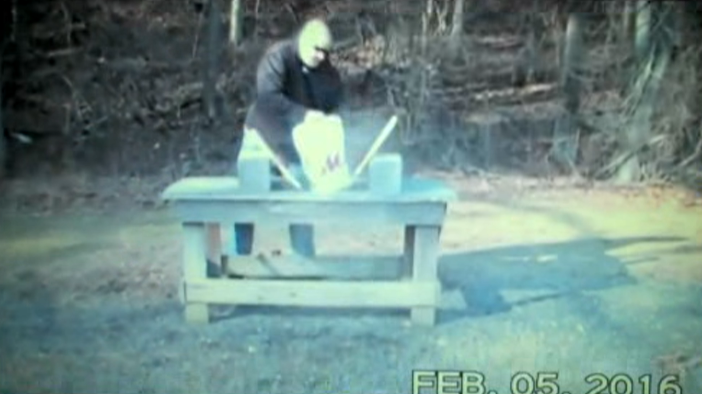 As Kenosha officer Pablo Torres waits to find out when and if he'll return to duty, there's new interest in a video released from the Kenosha County District Attorney that cleared Torres in the March 2015 fatal shooting of Aaron Siler.

The video from last month shows an expert, hired by the District Attorney’s Office, demonstrating how Siler's weapon, a plastic bucket, could be used to harm officer Torres.

The State Department of Criminal Investigation report says the bucket was empty during the incident.

But Michael Bell Sr., whose son was shot and killed by a Kenosha police officer in 2004, is raising questions about whether or not the bucket in the reenactment was in fact empty.

Bell told CBS 58 that he feels the video was manipulated and made to side with Officer Torres in this case.

He believes the expert in the video placed concrete powder or sand into the bucket to break the board because some sort of dust appears to fly out of the bucket when it hits the board.

Bell tried to recreate the video. He used a similar bucket and after multiple attempts could not break the wooden board.

He believes the video was created to justify the use of deadly force, and feels like the experts are fraudulently siding with police.

“The public needs to know that the D.A. is bringing in these highly paid professionals. And the public has no say so. And they are bringing in professionals that sometimes rule either way on these cases. They typically rule just in favor of the police department,” explained Bell.

The experts used in the case to clear Torres, also cleared Milwaukee Police Officer Christopher Manny in the death of Dontre Hamilton.

“It appears to be manipulated. That way it'll produce an outcome for its audience. And I was really alarmed by that because this is supposed to be an unbiased review,” Bell went on to say.

CBS58 did contact the Kenosha County District Attorney’s Office to get their take on the video, but as of the time of this writing, we have not received a response back.

Meanwhile, a spokesperson for the state department of criminal investigation stands by their findings on the shooting. Their report is available online.