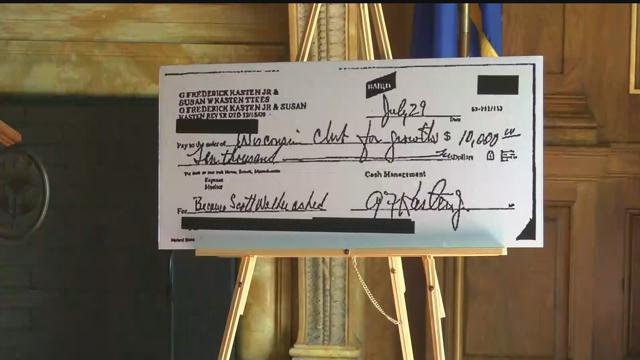 Governor Scott Walker is under attack from Wisconsin Democrats today over a new report that drags a dormant political investigation back into the spotlight.

This is just the latest chapter in a long political drama in Madison.

What brings it home to us here in Milwaukee is its link to the problem of lead paint in older homes in the city.

The new report from the British newspaper 'The Guardian' claims to use documents leaked from the John Doe investigation into Governor Walker's recall campaign.

That investigation was stopped by the state supreme court last year.

This report links political contributions from those dealing with lead paint to a group that helped the republican cause during the recall campaign.

Since then, Republicans have won approval for laws that help 'lead paint producers' including one law designed to protect them from lawsuits.

Lead paint has been linked to many cases of children getting sick here in Milwaukee.

So, was this a case of 'pay to play' for the paint makers?

Democrats say this pay for play, and want Governor Scott Walker to come out and explain himself.

They used that Guardian article to rip on Walker.

One of the released checks was put on display.

This check was to a third party organization.

Democrats repeated that phrase many times while questioning how heavily rich donors like this influenced current state law.

"As widely reported two years ago, the prosecutor's attorney stated that governor walker was not a target. Several courts shut down the baseless investigation on multiple occasions, and there is absolutely no evidence of any wrongdoing."

Democrats say they are combing through the 1500 pages of evidence published by the Guardian and say they expect to find more shocking details in the next few days.

Here in Milwaukee, Mayor Tom Barrett was asked for his reaction to the guardian's report on political contributions and the link to those involved with lead paint.

"I have to admit my reaction was 'wow'. When you look at the challenges we have here in the state of Wisconsin and the work that I've done that the city's done with lead paint in particular it was shocking to see that much money flowing in and disappointing,” said Barrett.

Meanwhile the Milwaukee County DA's office released a statement saying "the public release of this john doe evidence without court authorization is not merely a violation of the john doe secrecy order; it is a 'crime' under Wisconsin law.  We support any effort that may be undertaken to determine the source of these newest leaks."