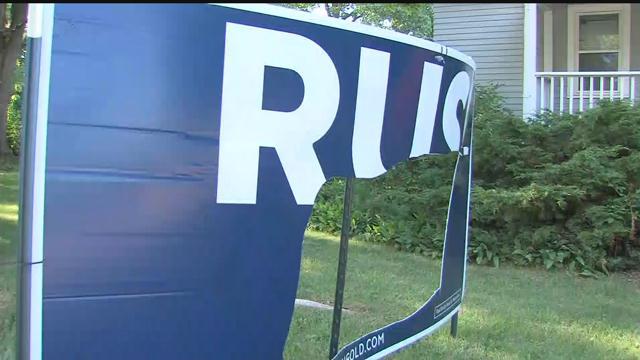 Dozens of campaign signs in local yards destroyed  and police believe it was by a group of "bored" teenagers. But some are worried this speaks to a much greater problem with the state's political climate.

"Its not American. Its not what we should be like as a people," said Jeff Schultz, a Fond du Lac resident.

We spoke with Schultz, who is upset after he had to replace the two signs that were stolen from his front yard in Fond du Lac.

"There's been times I've not been happy seeing other politicians signs but I have no desire to go out and smash them," said Schultz.

His yard wasn't the only target. In the past two weeks, about 50 political signs were stolen; damaged and discarded in other yards, even a school dumpster. Of these six large signs, put up in late June, only one remains.

No Republican signs were damaged.

"In the two statements I read they said, 'Well we got out of a movie on a Friday night and had nothing to do so we decided to have fun.' " said Kitchen.

But with these large signs costing as much as $75 each Kitchen tells us this is no joke.

"If you talk about trespassing, vandalism, and you add up the fines, it could go up to $750 per person," Kitchen said.

And while the vandals have been identified, Schultz says he is more worried about the lasting impact on the community.

"My neighbor won't put up signs. She's afraid someone's going to do something to her house and its hard to argue with that. Esp when you see how badly some of those Russ Feingold signs were damaged. No excuse for that," he said.

Kitchen tells us this was a rogue group of teens and that the Republican party had nothing to do with this.
He says if you're missing a sign, call the Democratic headquarters and they can get you a new one.