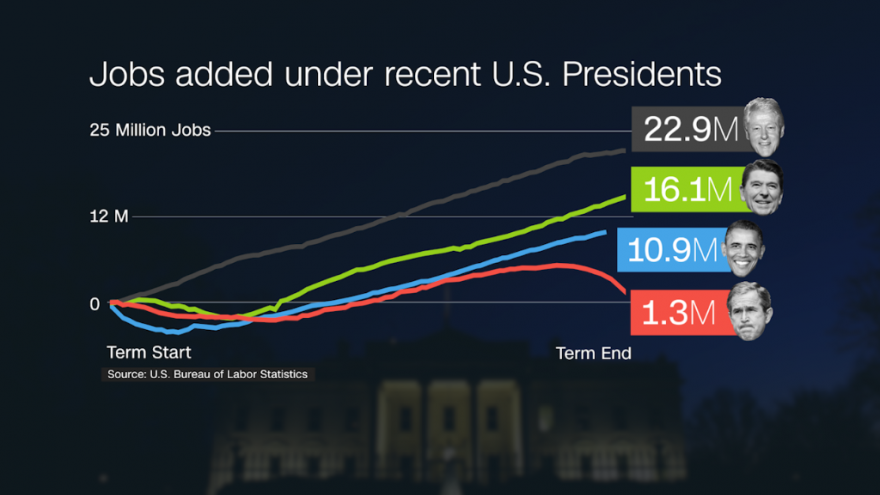 The Labor Department will publish the December jobs report on Friday, at 8:30 a.m. ET. It's the final jobs report to come while President Obama is still in office.

Economists forecast that America added 172,000 jobs in December. That would be almost in line with 182,200 monthly jobs created on average during the rest of 2016. The unemployment rate is expected to tick up a bit to 4.7% from 4.6% in November, which was the lowest level since August 2007.More broadly, it marks the end of the president's tenure overseeing America's economy.Since Obama took office in 2009, the economy has added over 11 million jobs. The president, however, often touts that America has added 15 million jobs during his time. That is true if you discount the job losses during the recession and start counting jobs that have been added since February 2010.

Still, it's a marked improvement since U.S. unemployment reached a peak of 10% in October 2009. December should also mark the 75th consecutive months of job gains in the United States.However, the gains have been uneven and many Americans feel left behind.

Many Americans are frustrated, a sentiment that factored into President-elect Donald Trump's election victory.

There is especially widespread discontent over lost manufacturing jobs. In Obama's first month in office in 2009, there were 12.5 million manufacturing workers. That figure fell to 11.4 million in 2010.In November, manufacturing jobs had almost come back to where they were eight years ago to 12.2 million. The difference: a growing share of the new jobs require advanced skills. Many of the lost jobs were low-skilled positions.

In other words, some manufacturing workers who lost jobs likely did not get the new factory positions, economists say.

Still, there are far fewer factory workers today than in prior decades. In 2000, there were about 17 million of them in America.