Dear Santa: 'Please catch the man who shot me' 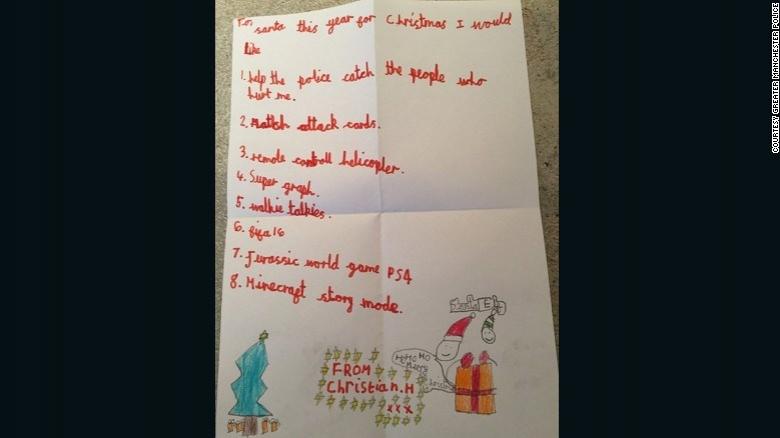 (CNN)It could be any seven-year-old boy's letter to Santa -- with one heart-wrenching exception: topping the list of requests for a walkie-talkie, Jurassic World game, and remote-control helicopter is a plea to find the gunman who shot him.

"1. Help the police catch the people who hurt me," writes Christian Hickey, after he was shot in the leg on the doorstep of his home in Manchester, England, last month.

Christian and his mother Jayne, 30, were both shot in the legs after answering the door to two men on October 12.

Following a brief conversation in which the men reportedly asked for the schoolboy's father, Christian senior, the youngster was shot in his thigh and his mother hit in each leg.

They have now left hospital after numerous surgeries, but police say the pair face a "long road ahead" to recovery.

"It is heart-wrenching to know that a little boy who should be writing a list filled with exciting gifts, has got this at the top of his Christmas list," said Detective Chief Superintendent Russ Jackson, of the Greater Manchester Police Serious Crime Division.

"What happened to Christian will stay with him for the rest of his life, but what we can do is try to make this up to him by finding those responsible and bringing them to justice.

"These people have absolutely no place in civilized society and we remain as determined as ever to find them."