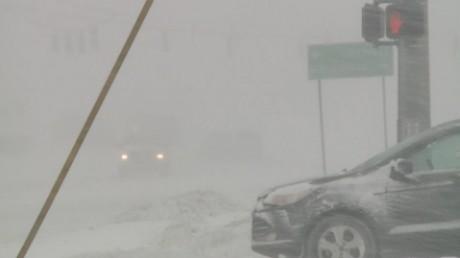 (CNN) The massive winter storm that's clobbered the East Coast is heading out to the Atlantic, but the problems it caused aren't over.

Crews are scrambling to clear the roads before the work week starts.

But while the sun and rising temperatures expected in some areas Sunday may help cleanup efforts, meteorologists are worried about ice, which could make roads more hazardous.

And on the New Jersey coast, flooding is a major concern as residents keep a wary eye on rising waters.

The storm has brought more than 3 feet of snow to some areas, killed 14 people, grounded thousands of flights and shut down travel in the nation's largest city.

But snowfall in most of the major cities affected will likely finish early Sunday morning, except for some isolated flurries, CNN meteorologist Sean Morris said.

But when he looked outside, he saw none.

"Then no more than 15 minutes later, I heard commotion out my window and I looked and I saw the raging water," he said. " It came in to the low-lying areas and it rushed fast, and it was like a tsunami."

The restaurant Pellegrini owns was damaged during Hurricane Sandy in 2012, but he says this surge came from the back bay and bodies of water to Sea Isle's west rather than from the ocean.

"It was overwhelming," Pellegrini said. "I rushed to move my car to higher ground, and by the time I got back I was in waist-deep water."

Coastal flooding remains a big concern for much of New Jersey due to the timing of the storm.

It hit during a full moon, which means high and low tides will reach their zenith and nadir for the month. Two high tides have come and gone, but a third is coming Sunday morning, during which forecasters predict more widespread flooding will occur.

After that, Pellegrini said, "I expect our town to be under considerable water."

The National Weather Service has issued a warning for the New Jersey coast until noon Sunday.

"Unfortunately we went through this a few years ago with Sandy," Pellegrini said. "I think now I'm just becoming accustomed to it."

They worked well during this storm, helping to push back waves that were as high as 20 feet, said Vincent Jones with the Atlantic County Office of Emergency Preparedness.

"They are basically the first line of defense," he said.

Margate City, just down the coast from Atlantic City, was also affected.

"In a lot of our business areas and our back bay areas, water is coming over the bulkhead in a lot of the same areas as Hurricane Sandy hit," Lt. Matt Hankinson of the Margate City Police Department said. "Some areas I would say it's thigh- to waist-deep."

Farther south in North Wildwood, the high tide was much higher than anticipated and caught many of the town's 5,000 year-round residents off guard -- with flooding levels that actually exceeded those during Hurricane Sandy, said Patrick Rosenello, the city's mayor.

"We had a lot of evacuations, a lot of people who had stayed in their homes not anticipating this, needing to be rescued," Rosenello said.

Most of the city was without electricity, he said, and the phones at the emergency dispatch center were jammed all day.

At least 14 people have died as a result of the storm -- six in North Carolina, three in Virginia, one in Kentucky, three in New York City and one in Maryland.

"I've never seen snow like this," said Luis Abraham Garcia, a doctoral student from Mexico City, as he trudged along snowy sidewalks with his suitcase.

Shepherdstown, West Virginia, got the most snow, with 40.5 inches, the NWS said.

Animals at the National Zoo in Washington saw just above 22 inches during the storm. Tian Tian, the giant panda, seemed to enjoy it.

Hundreds of motorists faced the storm's wrath stuck on highways.

In central Kentucky, some drivers were stranded along a 35-mile stretch of Interstate 75 for as long as 19 hours, from Friday afternoon to Saturday morning.

And as many as 200 vehicles were stuck on Interstate 77 in West Virginia, the Charleston Gazette-Mail reported.

Watch out for black ice

Washington and New York are expected to see sunshine Sunday, and temperatures just above freezing.

Those conditions will help plows clear snow, according to CNN meteorologist Jennifer Gray.

But with below-freezing temperatures expected to return Sunday evening, the melted snow may freeze into black ice.

"It's going to be like this for a while," CNN meteorologist Karen Maginnis said.

As of early Sunday morning, more than 74,000 customers were without power as a result of the storm, most in North Carolina. And 8,569 flights were canceled on Saturday and Sunday, according to flight-tracking service FlightAware.com.

Mass transit services in Washington and Baltimore were suspended for the weekend. And some Amtrak service to and from the East Coast was canceled or truncated.

A travel ban was in effect on all roads in New York City and Long Island on Saturday, but was lifted at 7 a.m. Sunday.