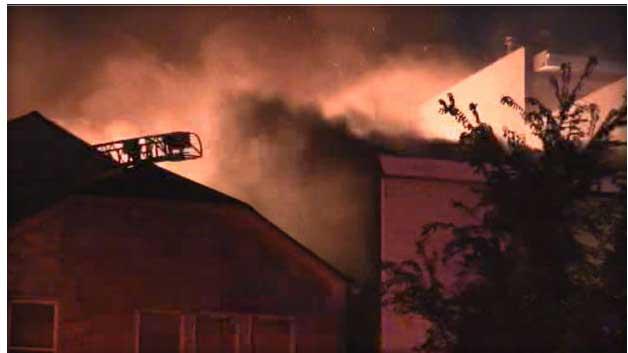 CHICAGO (CBS NEWS)-- A man was found dead and several others were left homeless after a string of fires that authorities said were deliberately set, CBS Chicago station WBBM-TV reports.

Neighbors described terrifying efforts to escape the flames after one apartment building was destroyed by a blaze. Fire officials said a total of seven garages were set on fire in a one-mile radius in the Heart of Chicago neighborhood starting around 3 a.m. Friday.

The largest fire started in a garage and spread to two apartment buildings in front of it.

Officials said a total of 25 people were left homeless.

“It’s tragic. It really is,” Fire Department District Chief Paul Foertsch said. “We didn’t have any injuries here, and we’re very fortunate. There were no civilian, no firefighter injuries, but we have 15 adults, 10 children without their homes, and for what?”

A father who lives in one of the apartment buildings said he made sure all seven members of his family got out safe. Then he went back inside to wake up his upstairs neighbors and broke into the garden-level apartment to save two kids and their parents.

Just a few blocks away, a man was pronounced dead after he was found inside a burning garage. Officials said he appeared to die of smoke inhalation.

Fire Department spokesman Larry Langford said at least five other garages in the neighborhood also were set on fire. All appeared to be the result of arson.

The police bomb and arson unit was investigating.