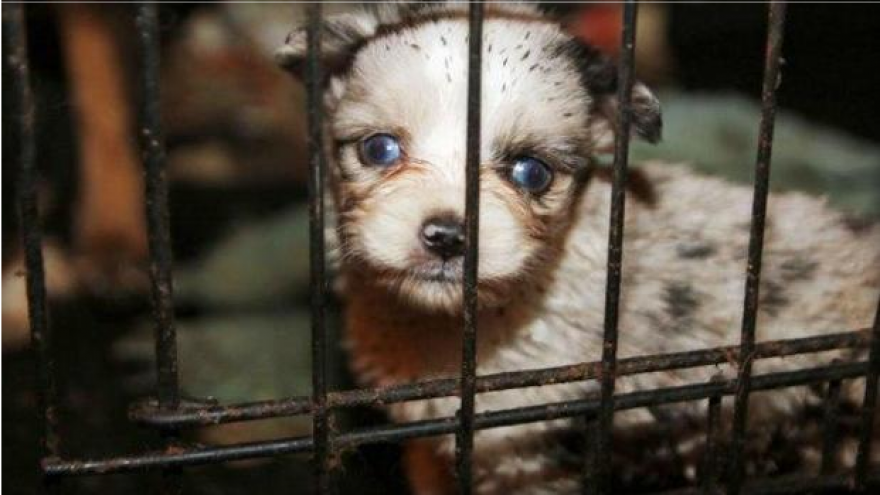 This dog was rescued from inhumane conditions in Canton. SPCA OF TEXAS/CBS NEWS

DALLAS -- The Society for the Prevention of Cruelty to Animals (SPCA) seized 72 dogs and puppies from an alleged puppy mill in Canton, Texas. CBS Dallas-Fort Worth reports 12 deceased dogs were found individually wrapped in plastic bags in the kitchen freezer.

SPCA investigators received a complaint of suspected animal cruelty from another animal welfare organization on March 1 regarding an alleged puppy mill. Investigators visited the property that same day, but were not able to make contact with the owner.

On March 13, the investigators returned to the property and witnessed the animals' conditions. SPCA investigators felt it was in the animals' best interest to seize them. A judge subsequently granted a search and seizure warrant.

The animals were taken to the organization's Russell E. Dealey Animal Rescue Center. Medical staff are examining and caring for the dogs until a custody hearing takes place.

Investigators say many of the dogs and puppies were found living in feces-filled wire crates without access to food or water. In one room, several nursing mothers with litters of puppies were found confined in small plastic and wire crates in a closet. Other dogs roamed the urine-soaked, feces-filled house with little to no access to food or water.

The animals appear to be suffering from various health issues including fur loss, long nails, eye and ear issues and matted fur.

The animal owner told investigators they were selling the dogs for profit. All large-scale animal breeders in Texas are required by law to be licensed and inspected on a regular basis. It is unclear at this point if the animal owner is properly licensed.

The Texas puppy mill bill, known as the Large-Scale Commercial Dog and Cat Breeder Bill, took effect on Sept. 1, 2012. It provides guidelines for the treatment of animals in large-scale commercial breeding operations in Texas, defined as breeders who keep 11 or more breeding females or sell 20 or more puppies or kittens a year. The law states that certain parameters exist for such animals including feeding, space, shelter, ventilation and medical care.

A court hearing will be held on March 23.