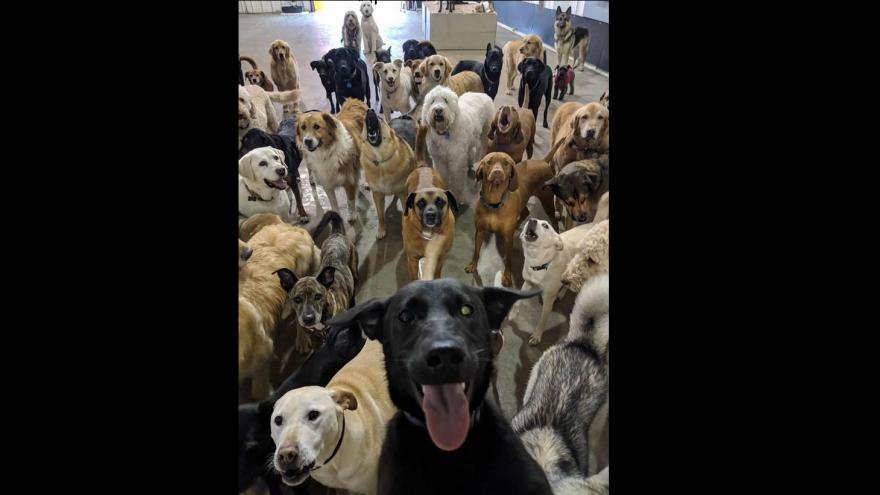 (CBS News) -- Every once in a while, someone snaps a selfie that echoes throughout the social media world. There was astronaut Barry Wilmore's epic selfie in space. There was Vice President Biden's inaugural bromance selfie with President Obama on his brand spanking new Instagram account.

And of course, when Ellen DeGeneres hosted the Academy Awards in 2014, there was the star-studded Oscars selfie seen round the world.

Gathering Jennifer Lawrence, Brad Pitt, Meryl Streep and more A-listers into a single selfie may have crashed Twitter. But there's a new jam-packed selfie on the web that's crashing the hearts of dog lovers everywhere.

The viral photo was posted on Facebook by a Cincinnati doggie day care with the caption, "A bunch of goofballs!" However, the goofiest part of the photo may be just how much it resembles a human selfie.

Behind him, some three dozen canines stand, tongues out, posing for the photo, too.

A source close to the situation tells CBS News that the center's owner "trains each dog as they come in to be part of the pack," and that the owner "has a special gift for training dogs to be very congenial with each other." It is thanks to that talent, she says, that world was gifted a "selfie" of so many dogs looking in the same direction.

It may not be an important story about politics, the economy or pressing international affairs. But in the current news climate, people could likely use a little fluff.