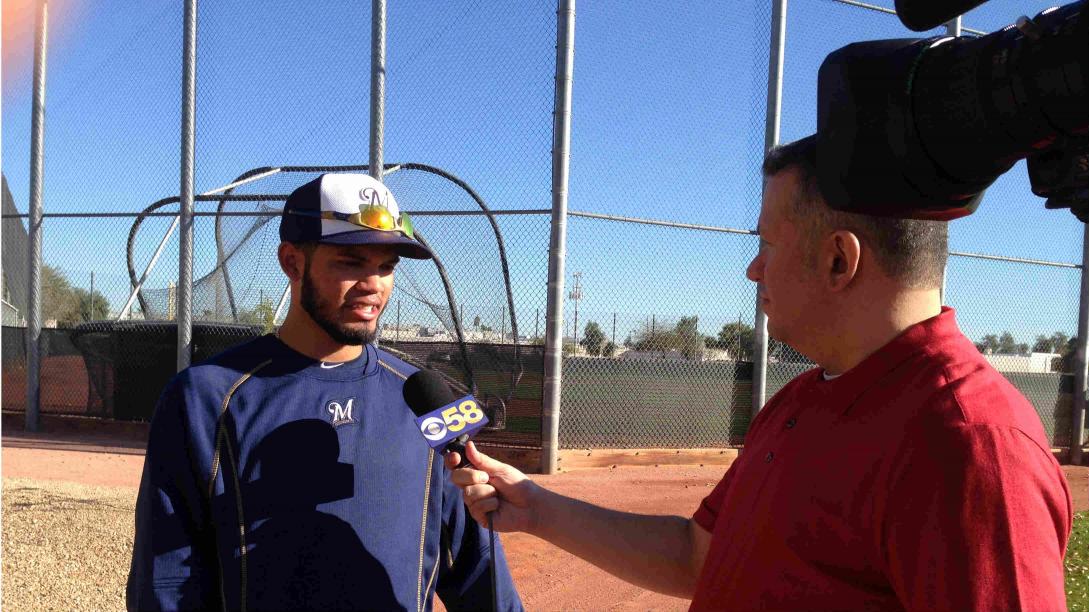 Wednesday's Brewers practice sessions at Maryvale Baseball Park in Phoenix have a feel of anticipation and a feeling closer to what you'd expect in a spring camp this time of year. Position players are required to report, so we'll get our first look at Ryan Braun and Aramis Ramirez, even if it's just a simple \"hello\" before the first full squad workout on Thursday.

Jonathan Lucroy is back with the team, trying to get in some reps with the pitchers and catchers, but he's still a little concerned about being 'contagious' from the nasty flu bug that has cost Jonathan Lucroy several days. We also have the first sighting of national TV media in this Brewers camp. Basically, the buzz is building, the practices are gaining in intensity, and the Brewers are getting focused ahead of next week's start of spring training games.

Some random observations from Wednesday morning: Scooter Gennett continues to come out of his shell thanks to a friendship with Carlos Gomez. Gennett's always carried a good attitude as a major leaguer, but he's obviously more comfortable and ready to embrace a role playing second base against all types of pitchers, lefty and righty.

Ron Roenicke gave good reports on Jim Henderson and Dontrelle Willis the last few days, which leads me to think about the arms-to-spots issue in the bullpen. With so many good arms (and potentially healthy ones) in camp, competition will be fierce for the seven or eight bullpen spots. Broxton, Will Smith, and Jeffress look like locks for positions. Roenicke likes Neal Cotts as a guy who can get out both left- and right-handed hitters. Jim Henderson and Tyler Thornburg are recovering nicely from 2014 injuries. And a potential K-Rod signing still looms. That's seven spots filled, without Chris Perez, Dontrelle Willis, or any potential camp surprises. The bullpen race could be really interesting this spring.

We talked with Luis Sardinas in both English and Spanish, and I walked away impressed. He's just 21, but there's obvious talent and what appears to be a willingness to be coached. I'm not saying he's a starter, but Sardinas could be an upgrade over Elian Herrera as a utility infielder.

And Dontrelle Willis still has everybody laughing, but he's also been one of the first pitchers out on the fields working with Brewers coaches in the early morning. He hasn't pitched in the big leagues in four years, but he's doing everything possible to latch on here.

More in the days to come from Phoenix.