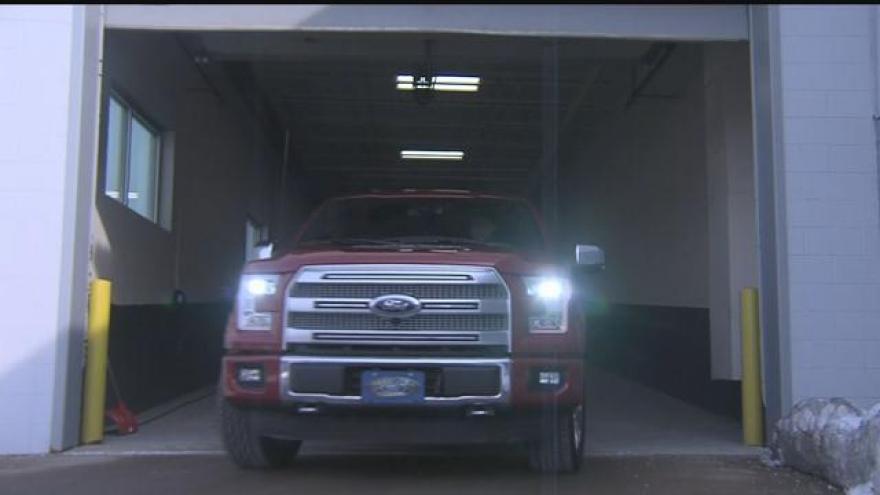 On Monday the CBS 58 Big Road Trip rolled into California. It was a fairly quick drive from Las Vegas to the California border, but shortly after passing through the mountains we hit that infamous California traffic.

We were about an hour behind schedule rolling into Los Angeles, but that didn't stop us from seeing one of the most historic sights in National Football - LA Memorial Coliseum. The Coliseum opened in 1923 and quickly underwent renovations to be prepared for 1932 Summer Olympics. Over 30 years later the Coliseum was host to Super Bowl I and the beginning of a Packers era.

We have seen a number of football stadiums on this trip: Arrowhead for the Kansas City Chiefs, Kansas State Stadium and now the LA Coliseum. The Coliseum is much less aesthetically pleasing than the others, but there is no denying the history. It almost feels like going to the Coliseum in Rome, where its character and history overtake the crumbling stone. My two favorite parts of touring the Coliseum were the chance to walk on the same field where Packers greats and others had walked and a chance to walk through the tunnel the players run through. The tunnel is very unique because when players exit the locker room there are a few seconds before they actually see the stadium. I can only imagine how much blood would be pumping through you as you are running down the tunnel with 200,000 people cheering you on.

Another neat aspect of the Coliseum were the locker rooms. They were miles and miles away from the extravagance of the locker room at Kansas State and the visiting locker room was even worse - certainly no space to sit and hear a halftime speech.

We didn't spend much time in LA, in fact we were probably only there for 12 hours. Tuesday morning was a very early morning for the CBS 58 Road Trip crew with two live shots for morning shows. The first was for WCIU in Chicago (CBS 58's sister station) where Bill and Justin chatted about the trip so far. The second was for our very own CBS 58 Morning News where Bill talked about the LA Coliseum.

Since we were already up, we decided to head to the Bay Area right away, but to take the scenic route - Pacific Coast Highway. It was gorgeous!! Traveling along the coast as the sun was rising was stunning and I was shocked to see so much agriculture in California. Sometimes we get so caught up in the big metropolises of the Bay and LA that we forget just how big California is!

The CBS 58 Road Trip team officially finished our journey around noon local time (2:00 PM central time) in San Jose. The road trip united with the air team at the house we are renting and then went to Levi Stadium (the home of Super Bowl 50) to get ready for the afternoon news.

Security around the stadium is nuts!! There were two military helicopters circling the grounds and numerous roads are shut down by National Guard units, but that isn't stopping visitors from stopping to take it all in. Just in a two block radius the CBS 58 crew was one of five TV stations getting ready for live coverage. The Super Bowl vibe is growing here and we are excited to see how the next five days go!

Although the physical driving part of the CBS 58 Big Road Trip is over, the expanded crew of six has you covered for Super Bowl and interesting news until Super Bowl 50 is over!

PS The forecast right now for Super Bowl 50 is sunshine and 70 degrees. Jealous?