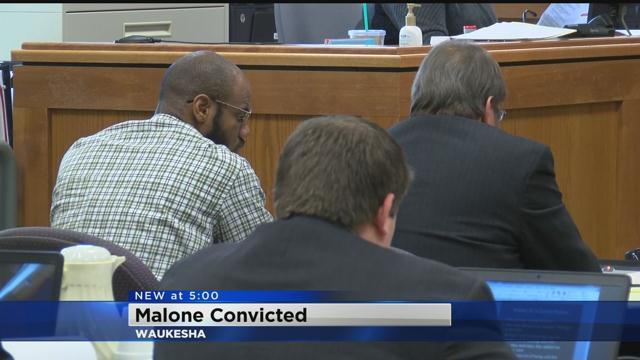 Darrin Malone was found guilty on Thursday in Waukesha for the robbery and fatal shooting of a gas station clerk.

The 29-year-old was charged with helping 2 other people carry out a robbery at a gas station in January of last year.  Prosecutors claim Malone and Kenneth Thomas went into the store wearing green masks and pointed a gun at the clerk, Saeed Sharwani.

According to police reports, Sharwani was shot in the chest by Thomas and died at a local hospital.  Malone's attorney says there is no evidence to prove his client was there.

Around 2 PM the jury asked to replay surveillance videos from the gas station shooting.

Not only did they ask to see it again. They asked to look closer at the video.

So the jury huddled in front of the courtroom to watch multiple surveillance videos from inside and outside of the gas station.

"Exhibit 27 was a request for viewing of the videos up close not from the jury box. My proposal is to have the jury member congregate around the screen not blocking the projector," said Judge Lloyd Carter.

Just minutes after the jury saw those videos, they came back into the room with a verdict.

He will be back in court in April for his sentencing.