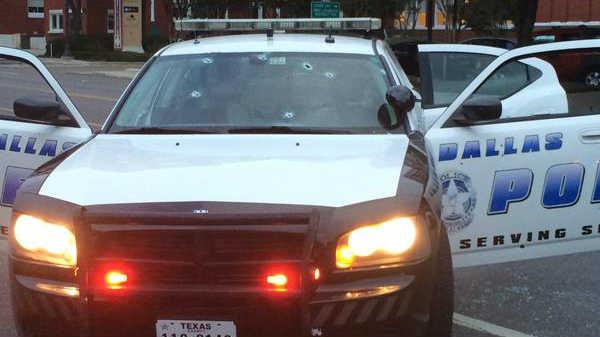 SWAT team snipers \"shot at the suspect ... through the front windshield of the van, striking the suspect,\" Dallas Police Chief David Brown said Saturday morning of a man suspected of spraying the Dallas police headquarters with bullets hours earlier.


A bomb tech robot is being used \"to try and confirm whether the suspect is deceased\" in a van at a suburban Dallas restaurant parking lot, Brown said at a Saturday morning news conference.

Because the suspect claimed his van \"was rigged with explosives,\" authorities will have a \"planned detonation ... at that van,\" according to Brown.

After earlier stating witnesses had seen as many as four suspects, the police chief said that authorities now believe there's only one suspect.

\"(Police) believe this suspect meant to kill officers and took time to discharge that weapon multiple times to accomplish\" this goal, Brown said.

The chief said bullet holes were found in not only squad cars but in the police headquarters' front lobby, its information desk, a helicopter that's inside as a museum piece, and on the building's second floor.

During negotiations, the suspect \"would get angry (and) rant\" until, \"at some point, negotiations just ceased ... on his end,\" according to Brown.

\"We don't yet know motive,\" the chief added, noting that authorities currently don't see anything indicating this type of attack was coming.

At least one attacker opened fire on Dallas' police headquarters early Saturday, riddling windows and police cars with bullets before fleeing in a van to a suburban restaurant parking lot, where officers surrounded the vehicle in a standoff that has lasted for hours.

Officers exchanged gunfire with the attacker or attackers at both sites. And as dawn broke in Texas -- hours after the near-midnight attack began -- they still were watching the driver in the parking lot of a Jack in the Box restaurant in Hutchins, forcing authorities to close parts of nearby Interstate 45.

No injuries were immediately reported, but police were dealing with a parallel threat -- at least two pipe bombs that were found outside the police headquarters after the initial shooting.

One of the devices exploded as a bomb-squad robot tried to move it Saturday morning. Police posted a picture on Twitter that appeared to show that vehicles were damaged in the blast.

The bomb squad detonated the second device. Police later said they determined there was no longer a threat at the headquarters building, but they still were searching the area for more explosives.

Here are some pictures of the damage at HQ. pic.twitter.com/ic18axSTPO

Parts of the initial attack were caught on video by several people nearby, including residents of an apartment building across the street, some of whom were asked to evacuate after the explosives were found.Witnesses told police they believed more than one person opened fire on the police building from various locations at about 12:20 a.m. (1:20 a.m. ET), and an attacker was in a vehicle that appeared to be an armored van.

\"There might be up to four suspects,\" Police Chief David Brown said.

This is where the Explosive Ordinance Robot attempted to move one of the bags. #DallasPDShooting pic.twitter.com/mgbgytBhWv

Police returned fire and gave chase as perhaps one or more suspects jumped into the van, the police chief said. Brown added that it appeared one person appeared not to make it on board in time, but it wasn't clear whether that person was arrested.

Video recorded by a witness and aired on CNN shows the dark van ramming the front of a police car before retreating in reverse.

Picture of squad car that was shot at. No officers were injured. pic.twitter.com/vfT2nCiJzP

SWAT team negotiatesPolice pursued the van to the restaurant parking lot in Hutchins -- roughly 13 miles to the southeast of the Dallas police headquarters -- and a standoff began.

A SWAT team was negotiating with a suspect in the vehicle who gave the name James Boulware. Police said that they cannot independently confirm that it is the suspect's real identity.

Police found a previous record of domestic violence by a man under that name. The suspect told police that he was angry because they took away his child and labeled him a terrorist.

\"We heard loud noises, my wife asked if I thought they were shots,\" he said. \"I went over to the window and put one of them up. And we heard more shots being fired, and I turned to my wife and said, 'Yeah, that's definitely gunfire.'\"

He got his cell phone and recorded video. After the van fled, police informed him and his wife that they had to evacuate their building.

\"They've instructed us that we may be out of our home for a while,\" he said.

Police had discovered the suspicious bags right across from it.

He threatened to blow them up and broke off negotiations, Brown said.

At one point, police used a .50-caliber rifle to \"disable\" the vehicle, police said.

Investigators are looking into whether a van sold in Newnan, Georgia, on eBay last week may be the van used in the Dallas attack, a source familiar with the investigation said. They are investigating, among other things, who may have purchased the vehicle.

The crackling sound of the Dallas shootout got the attention of former Marine Rick Birt, who lives in a large loft and office building across the street from the headquarters.