Dallas Mavericks owner Mark Cuban: I have prejudices; everyone does 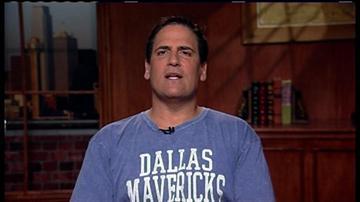 (CNN) -- Mark Cuban is known for making pointed statements. Usually they are directed at the NBA brass or referees. Or contestants on the TV show \"Shark Tank.\"

On Wednesday, he made a few remarks about bigotry that in light of the Donald Sterling scandal caused a bit of an uproar.

In an interview with Inc. magazine at a business conference in Nashville, Tennessee, the Dallas Mavericks owner and billionaire entrepreneur talked about his own bigotry.

Cuban said everyone has prejudices \"in one way or the other.\"

The Mavericks owner issued a five-part tweet Thursday afternoon in which he apologized to Trayvon Martin's parents for the hoodie reference, but stood by the context of his answers and called for more tolerance.

Martin, a Florida teenager, was wearing a hoodie when he was killed by neighborhood watch captain George Zimmerman in 2012. The case sparked a heated nationwide discussion about race as well as a debate over Florida's \"stand your ground\" law.

Cuban wrote: \"I think that helping people improve their lives, helping people engage with people they may fear or may not understand, and helping people realize that while we all may have our prejudices and bigotries, we have to learn that it's an issue that we have to control, that it's part of my responsibility as an entrepreneur to try to solve it.\"

CNN commentator and ESPN senior writer LZ Granderson said he thought Cuban was trying to have a nuanced conversation but didn't do it very well.

Granderson said he was disturbed that Cuban equated the hoodie stereotype -- something he said has led to unjust treatment of African-Americans and even killings -- to the stereotype of the tattooed white man.

\"One has history and the other doesn't or the same sort of emotional response,\" Granderson said.

Cuban is one of 30 NBA owners who'll decide whether racist remarks made by Sterling are damaging enough to terminate his ownership rights to the Los Angeles Clippers. Cuban told business owners during a Q&A session that he knows how he will vote but wasn't ready to announce his decision.

Granderson still expects Cuban to vote against Sterling on June 3 when the NBA Board of Governors meets to decide the fate of the Clippers franchise.

\"If you listen to the entire interview, he certainly made it sound as if he's going to vote Sterling out, but not without some regret,\" Granderson said. \"And he voiced that regret, which is we all have bigotry.\"

In his interview Cuban said when he runs into bigotry in his organizations, he tries to find solutions.

It does society no good to respond to someone's racism or bigotry by telling them to \"go take their attitude somewhere else,\" he said.

It's better to work with them and teach them why their views are wrong.

When Cuban was asked how you keep bigotry out of the NBA, where he has been an owner since 2000, he told the conference audience: \"You can't keep that ugliness out of the league. There's no law against stupid. I learned that a long time ago.\"