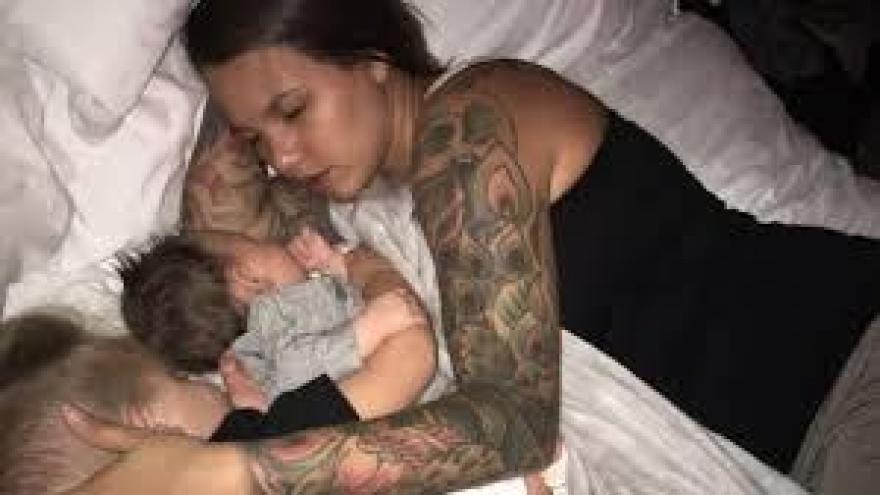 (CBS NEWS) A man’s emotional Facebook post praising his wife for “snuggling” with their children in bed in a practice known as “co-sleeping” is going viral -- and it’s sparking a massive debate.

When Oklahoma City resident David Brinkley snapped a quick picture of his wife, Alora, napping with their baby and 2-year-old over the weekend, he never expected it to be shared by hundreds of thousands of people, let alone get picked apart by critics.

“Do I have to squeeze into a small corner of the bed sometimes? Yeah? But my God how beautiful does she look holding my children?” Brinkley wrote in the post that was shared by more than 500,000 people.

He continued, “I just want to say that I am proud of the decisions my wife makes as a mom and I support every single one of them.”

But not everyone supported the idea of sharing a bed with the baby, and the flood of criticism eventually led Brinkley to delete his post.

“This is dangerous for the baby,” one Facebook user commented. “Babies should sleep alone, on their back, in a crib. Remember the A< B< Cs of safe sleep.”

“Co-sleeping is not safe,” another added. “Children get rolled on all of the time, and this type of behavior creates children who can’t sleep on their own without touch!”

Some parents, however, disagreed, and even shared photos of their families co-sleeping.

“Co-sleeping happened for thousands of years until we became a ‘civilized’ society and put the kids at the other end of the house!” one Facebook user said, arguing that “it calms the kids and the mothers and encourages somewhat deeper sleep.”

“I love this. We did everything ‘right’ with our first child. Own cot, own room.... We relaxed with numbers 2 and 3 and both co-slept till well past a year,” another added.

Co-sleeping has long been a controversial parenting topic, and there are some differences of opinion even among the experts.

Susan Castellano, maternal and child health director at the Minnesota Department of Health, suggests parents follow the Consumer Product Safety Commission and American Academy of Pediatric’s (AAP) infant sleep guidelines, which both advise against sharing a bed with a baby -- as it can lead to accidental suffocation and increase the risk of Sudden Infant Death Syndrome (SIDS).

“First of all, you can’t argue with [Brinkley’s] sentiment and his support of his wife. That was so sweet,” Castellano told CBS News. “But I think the danger is that we do know co-sleeping can end in infant death. It does. It happens all the time.”

Approximately 3,500 babies die annually in the United States from sleep-related infant deaths, according to a 2016 AAP report. The AAP recommends babies sleep in the same room but not in the same bed as their parents. Put babies to sleep on their backs on a firm mattress and ensure the area surrounding the child is free of pillows and blankets to reduce the risk of suffocation. Couches and armchairs are extremely dangerous places for infants, the AAP warns.

The question parents need to ask themselves when it comes to co-sleeping, Castellano says, “Is it worth the risk?”

Dr. James J. McKenna, a professor of anthropology and the director of the Mother-Baby Behavioral Sleep Laboratory at the University of Notre Dame, on the other hand, says statistics and warnings from organizations like the AAP shouldn’t be used to scare parents.

“You have to go out of your way to make [co-sleeping] dangerous,” McKenna told CBS News. “No matter how many warnings or misrepresentations of inherent dangers moms and babies find themselves.”

For the past 30 years, McKenna has been arguing on behalf of parents who choose to co-sleep.

“Babies have always slept and always will sleep next to their mothers,” McKenna said.

McKenna said he especially supports the concept of “breastsleeping,” the combined act of bedsharing with breastfeeding.

“It’s biology. When [a baby’s] touching, hearing and smelling the mother that’s making an enormous difference in body temperature, heart rate, hormonal levels... they’re all being regulated by that direct contact,” Mckenna explained. “Human infants are contact seekers on which their survival depends being as close to that mother as they possibly can.”

Castellano argues babies can also benefit from simply being in the same room as their mother and can also bond with their parents when everyone’s awake and alert.

“Yeah, bonding is important. I think there are other ways to do that while you’re all awake and experiencing it,” she said. “It’s both great for bonding and has a million other benefits as well do bonding when everyone’s awake.”

In response to the backlash, Brinkley’s wife took to Facebook on Sunday to clarify that her children were never in any danger.

“My husband supervised this entire experience and made it possible for me to comfortably lay with them both like this as he very lovingly and carefully watched over us,” she wrote. “We would never put our children in a dangerous situation and our night time sleeping looks completely different than this. As far as co-sleeping goes that was not the point of my husband’s post.”

Instead, Alora says the post was meant to shine light on a husband’s support for a wife and mother.

“So take it for what it is say what you want run with it, whichever direction you chose, but that doesn’t define a person or a family,” she said. “We like to support and encourage everyone! There are still so many good people in this world and we just aren’t afraid to show that.”