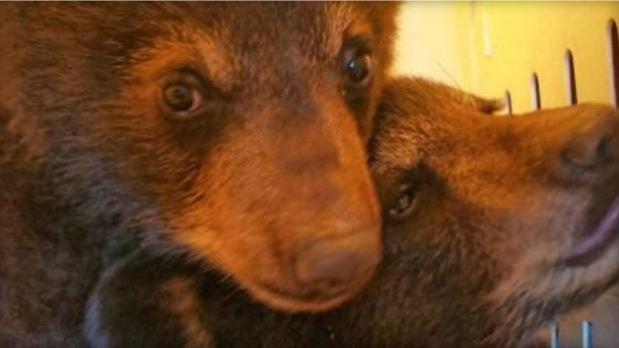 (CBSNews) GARDNER, Mass. -- From the ground neighbors could see their little heads.

"They stayed at the top of the tree looking down," said Brian Erickson.

CBS Boston reported that two bear cubs found themselves stuck and suddenly alone, their mother dead on the ground.

"She was up the tree with cubs and right next to tree is a transformer and power line and from the looks of the injuries to the mother she hit her left foot on the power line," said Sgt. William Woytek with the Massachusetts Environmental Police.

Sgt. Woytek was first on the scene in Gardner, Massachusetts, on Monday. He knew he had to get those cubs down to safety after their mother was electrocuted. So with the help of a Gardner fire ladder truck, he went to work

"I was able to grab both cubs with my hands. We got the cubs into backpacks," said Woytek.

It wasn't easy, but Sgt. Woytek got them both, just in time.

"The last thing I wanted was them going further up the tree,"said Woytek.

Neighbors told CBS Boston the momma bear has been in the area for weeks.

"All around the neighborhood all the neighbors have been spotting her," said Heather Mackensie Erickson.

The problem, said Sgt. Woytek, are all the bird feeders in the area. The bears are coming to eat, and getting hurt. There was corn and birdseed beneath the tree where the bears were stuck.

"The demise of these bears was being fed by people," said Woytek.

A sad lesson for families here who now hope all those tempting bird feeders nearby will disappear.

Now the bear cubs have been taken to Tufts Animal Hospital in Grafton and will be taken care of by a rehabilitator until they are ready to go out on their own.