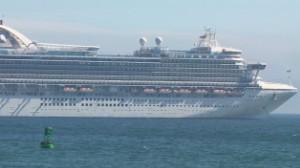 Three outbreaks of illness affecting more than 100 people each have been reported aboard two cruise liners -- two of them in back-to-back cruises of the same ship -- according to the nation's leading health protection agency.

The double dose of ill-fated cruises struck the Royal Caribbean's Grandeur of the Seas, the Centers for Disease Control and Prevention said Friday. During the ship's April 5 to April 12 cruise, 105 of the nearly 3,000 passengers and crew were affected -- primarily with vomiting and diarrhea, the disease agency said.

During the ship's cruise the prior week, 117 passengers and crew members were struck, according to the CDC.

Two CDC Vessel Sanitation Program environmental health officers and an epidemiologist were to board the vessel in Baltimore, Maryland, on Saturday to conduct an investigation. Specimens were being collected to be sent to the CDC lab for testing.

\"We'll be working with both the medical teams as well as the crew on board the vessel and the cruise line with doing follow ups,\" Bernadette Burden, a CDC spokeswoman, told CNN affiliate WJZ. \"Really taking a look at their cleaning, sanitation and hygiene practices that are being employed on the ship to interrupt the spread of disease.\"

But the ship's owners were planning to plunge onward, departing as scheduled at 4 p.m. Saturday on the next cruise -- seven nights to the Bahamas. Royal Caribbean told WJZ that any would-be passengers feeling a little queasy about the prospect of leaving Saturday aboard the twice-stricken ship could reschedule.

The chief suspect behind all three waves of illness is norovirus, a highly infectious virus that can be picked up through contaminated food or water or by touching contaminated surfaces. It causes inflammation of the stomach, intestines or both, often leading to stomach pain, nausea, vomiting and diarrhea.

Cruise ships are a prime target.

\"We have so many people together in a closed environment, eating in the same place,\" Catherine Troisi, associate professor of management, policy and community health at the University of Texas School of Public Health, told WJZ. \"That's why you see it.\"