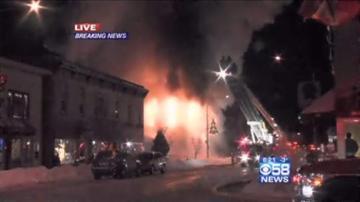 WATERFORD -- Emergency crews are on the scene of a 3-alarm fire at Martini Mo'z on East Main Street in downtown Waterford.

The Racine County Sheriff's Department says at about 3:30 a.m., deputies reported seeing heavy smoke coming from what appeared to be the basement of the building, which houses the Martini Mo'z cocktail lounge on the lower level and a private residence above.

Waterford officials said there are no injuries at this time.

Two people made it out of the building safely and two people in a neighboring residence were evacuated. The Red Cross has been contacted for assistance.

At around 6:20 a.m., intense flames could be seen shooting from the windows of the building.

Motorists are advised to detour downtown Waterford by using STH 36, CTH D and CTH W through the Village of Rochester.

Firefighters from several departments are still on the scene and we will have more information as it becomes available.