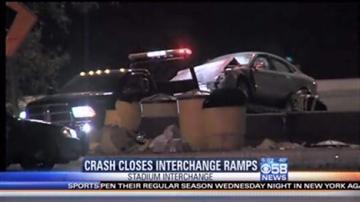 MILWAUKEE -- All lanes of Highway 41 into I-94 East in the stadium interchange were temporarily closed after a high-speed pursuit of a suspected drunk driver led to a crash.

The Milwaukee County Sheriff's Office says 40-year-old Kevin Hutchins was driving the wrong way on Hwy 100 when a deputy attempted to pull him over.

He sped away from the deputy hitting speeds above 100 mph.

Hutchins crashed in the southbound lanes of Highway 41.

A deputy trying to avoid debris on the road crashed and suffered minor injuries.

Another deputy was taken to the hospital and has not been cleared to return to work.

Hutchins received minor injuries, but was taken to the hospital for evaluation and treatment.

If convicted, Hutchins could face 32 years and nine months in prison.

The Sheriff's Office said that Hutchins is the 1,000th repeat drunk driving offender caught by the department since 2010.

Hutchins faces charges that include his third OWI, recklessly endangering safety, resisting and obstructing, fleeing an officer, and battery to an emergency medical care provider.

In April, Hutchins was also arrested for second degree sexual assault and battery.

He was out on bail for those charges when the crash happened.