NOW: Freeway reopened after semi crash shuts down NB lanes of I-94 at Hwy G

MILWAUKEE (CBS 58) -- A Friday afternoon crash involving 2 semi trucks and a vehicle on I-94 NB at Oakwood Road remains under investigation.

According to the Sheriff's Office, the vehicle lost control and hit the temporary median wall which caused I-94 to be shutdown for hours.

The crash between the semi-trucks caused a cargo shift, which resulted in a spill of concrete sealant from the striking vehicle.

The other semi-truck contained paper products.

Due to the hazardous materials that leaked onto the freeway, a hazmat and environmental response was requested.

RACINE, WI (CBS 58) -- I-94 northbound at HWY G reopened to traffic after being closed for nearly 12 hours.  The section of the freeway at the Milwaukee/Racine County lines was reopened to traffic just after midnight Saturday.   It had been closed so hazmat crews could clean up a spill of what was described as sealant.   The sealant was being hauled by one of the two semi-trailer trucks that collided around 11:30 a.m  Friday morning.   There were only minor injuries reported in the crash.

RACINE, Wis. (CBS 58) -- I-94 northbound will remain closed at Hwy G. According to WisDOT, the cleanup may continue until 1 a.m.

The northbound lanes of I-94 at Hwy 20 are opening.

Motorists are encouraged to use alternate routes of travel to avoid I-94, including Hwy 31 and Hwy 45.

RACINE, Wis. (CBS 58) -- The northbound lanes of I-94 in Racine have been closed for hours Friday as crews worked to clean up a crash.

According to the Milwaukee County Sheriff's Office, two semis collided as they tried to avoid another accident on the freeway. One of the semis was hauling some sort of sealant and Hazmat crews have been on the scene to clean up the spill.

Only minor injuries were reported in the semi crash and the previous crash was investigated by Wisconsin State Patrol.

Around 5:30 Friday evening, the Racine County Sheriff's Office says the northbound lanes of I-94 at Highway 20 are opening, but a full closure is still in effect at Highway G. I-94 northbound will continue to remain closed at Highway G with an estimate of reopening at midnight.

Motorists are urged to use alternate routes to avoid I-94 and include Highway 31 and Highway 45.

Detour route information for northbound I-94 is as follows: Exit northbound at Highway G and follow traffic officer directions to 27th St. Drive north on 27th St to Ryan Rd. East on Ryan Rd to access I-94 north.

The southbound lanes within Racine County are unaffected at this time.

According to the Wisconsin Department of Transportation, there is a reported hazardous material spill and the freeway could be closed for several hours as the materials are cleaned up.

Freeway closed I41/94NB between WIS 20 and 7Mile Rd. due to crash involving a semi. Use Hwy 31 or US45 as alternates. @CBS58#ReadyTrafficpic.twitter.com/KJCQj1cZA6

The crash happened around 11:30 Friday morning. 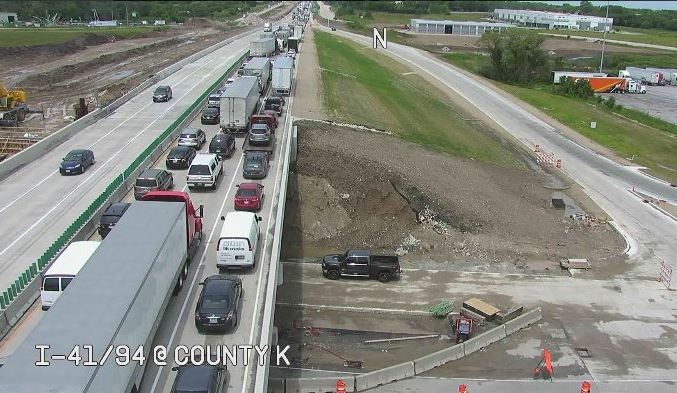 According to the Milwaukee County Sheriff's Office, which is investigating the crash, the Highway G on-ramp northbound is closed and traffic is being diverted off the freeway at Highway 20.

Drivers should expect delays and avoid the area.