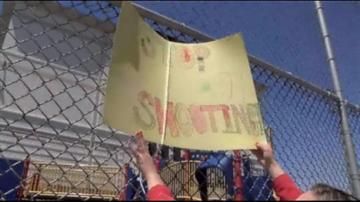 MILWAUKEE-A cry for police action Friday from the loved ones of 10 year old Sierra Guyton, still battling a head wound after being caught in the crossfire at the Clarke School playground.

One day after the Wednesday shooting, police said they had identified at least one suspect.

But no other information has been made public since.

\" It means a lot to get them off the street,\" cousin Devin Whitley told CBS 58 News. \"Get the guns off the streets really,\" he added.

Parents who live in the neighborhood near the school say they are struggling to explain  violence to their children.

Many of the victim's classmates have posted signs of well wishes on the fence by the playground. Other signs simply state stop shooting.

On Friday evening, several community and church leaders will gather to honor Sierra, but also pray for change.

And to the critics who say prayers are not enough, organizer Tory Lowe responds: