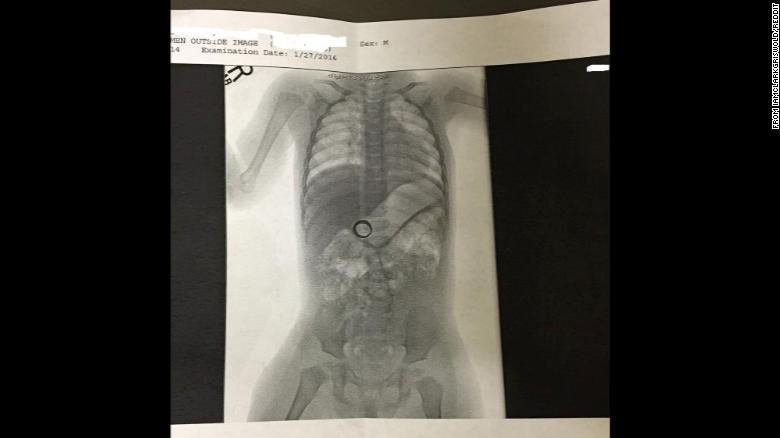 (CNN)You never know where that misplaced thing will end up.

A Seattle-area woman learned that the hard way after she noticed her wedding ring was missing on Thursday, according to a Reddit thread.

Who was the culprit? Their 14-month-old baby.

Imaging done by doctors at a hospital revealed a platinum wedding band lodged inside the baby's gut, according to Reddit user, iamclarkgriswold, who posted the story on the social media site. After being under observation for eight hours, the tiny tot was discharged and the parents were instructed to wait for nature to take its course.

"We were allowed to go home. If it doesn't pass naturally in two weeks, they will go get it," iamclarkgriswold wrote, explaining that doctors would have to perform surgery or use other medical methods to extract the ring if it didn't come out naturally.

After leaving the hospital the family was officially under "passing" watch, the father wrote in a post. Everyone -- husband, wife, the couple's other two kids -- was monitoring the toddler.

As the great baby-watch unfolded, Reddit users were abuzz with excitement.

The couple dissected each diaper like a grade-school science project in hopes of finding the ring, the father wrote.

After much anticipation and bemoaning, the couple fished out the wedding band and posted a not-suitable-for-work photo of it as proof.

Dad said he was thankful the toddler showed no signs of discomfort during the "passing" and reassured those online that the baby was doing just fine. He also asked people to be understanding.

"Don't be too critical of us. He's the third. The third practically raises themselves," he wrote.

Most parents know, or soon discover, that babies put everything in their mouths. Putting toys and objects into their mouths is part of a baby's developmental process, according to the Centers of Disease Control and Prevention.

Babies put things in their mouths to explore objects around them, pediatrician Jennifer Shu told CNN. And they will continue to do so until they are two or three-years-old.

"Or sometimes longer," Shu said. "Think about adults who chew on pens or pencils."

CNN reached out to Reddit user iamclarkgriswold on Friday for a comment, but has not heard back.