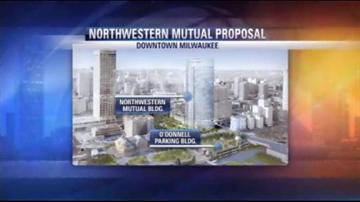 MILWAUKEE -- A battle is brewing over a prime piece of Milwaukee lakefront property.

The O'Donnell parking structure, owned by Milwaukee County, has room for more than 1,300 cars, but has major repair needs.

Northwestern Mutual is building a new $450 million office next to the parking structure and the company says its prepared to buy the entire O'Donnell Park property -- including the structure, pavilion, and plaza -- for $14 million.

Public parking would still be allowed and the company says all repairs would be taken care of and green space would be added, with no cost to taxpayers.

The county could net more than $5 million for selling the property and could use the money to fix other parks in need, but one county supervisor says the plan just isn't enough given the property's lakefront location, and wants Northwestern Mutual to go back to the drawing board.

\"Netting $5 million from the sale won't begin to address the needs we have for our parks and other public amenities,\" Milwaukee County Supervisor Michael Mayo, Sr. said.  \"In addition, how are we going to replace the $1 million in revenue that the parking structure generates for Milwaukee County each year?\"

Mayo said he has a lot of respect for Northwestern Mutual and its role in the community, but said the proposed sale price of $14 million is too low, and questioned if the deal better suits the company instead of Milwaukee County residents.