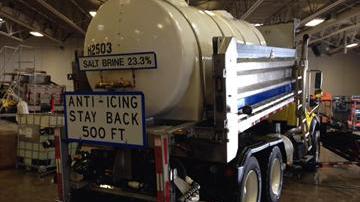 \"It is unusual for the large pileups, the number of large pileups that happened,\" Milwaukee County Sheriff's Office Captain Daniel Hughes said.

\"I started a day and a half ago preparing for this,\" Hughes said.

Hughes knows his team needs to be ready.

\"We adjust staffing,\" Hughes said.  \"We'll extend our shifts, we'll bring people in early, we'll overlap so that we don't have a lapse in coverage, even a minimal amount of lapse in coverage, we like to keep it bulked up for the majority of the heavy snowfall.\"

The sheriff's office will have at least 25 to 30 patrol cars out on the roads.  Hughes thinks Sunday's problems can be avoided this time around.

\"We weren't driving appropriately for the conditions,\" Hughes said.  \"We weren't giving that increased distance, between cars and we weren't really driving with regard to how the weather conditions were and how they were changing.\"

Out in Waukesha County plow trucks are washed and ready  - this time they'll have some help from Sunday's storm.

\"We have plenty of salt residue on the roads already,\" Peter Chladil from Waukesha County Highway Operations said.

Waukesha County will have 58 trucks on the road once the snow starts.  Each truck carrying between nine and 14 tons of salt.  Even as law enforcement and highway departments do their jobs, they both have advice for drivers.

\"Slow down and reduce your speed appropriately for the snow conditions that are coming down,\" Hughes said.

\"Hey if it takes you five minutes extra to get someplace so be it. That's better than being stuck in the ditch for hours,\" Chladil said.