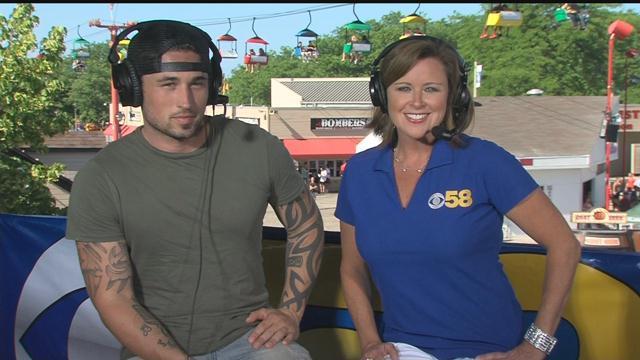 Michael Ray is always on the road and it only seemed natural to have that include a stop at Summerfest.

Taking a break from his tour with Darius Rocker, the Florida native remarked on the heat and humidity that greeted the Tuesday re-opening of the world's largest musical festival.

Ray says he has a planned set list of 75 tunes. But always reads the crowd and sometimes will mix it up a bit.

When asked if he slows it down if the ladies get too excited the crooner replied, "We need to keep the heat going. We're gonna keep it happening."

Since he spends so  much time on the road,  he sometimes has song writers visit on the tour bus to bang out a few songs that might have been inspired by adventures on the road. But he also looks to a rich library from songwriters based in Nashville.

His new song "Think a Little Less"  is the one he's most excited about performing in Milwaukee.

Ray grew up around music.

"My family had a band. My grandpa, my uncle and my cousins. They played before I was born."

He says as he grew up and the cousins set about living their own lives, he would join his grandfather every weekend at the tender age of nine or 10.

He says he has many influences from Merle Haggard to George Strait.

He also was exposed to the music of a fellow headliner, "Blink 182" which was playing the Marcus the same night he took to the U.S. Cellular Connection Stage at 8 p.m. Tuesday.

Ray has no illusion about being directly compared to the country legends, but hopes that folks who listen will hear that he was influence by the greats as he sets out to capture some greatness of his own.

For a link to his FB page click here