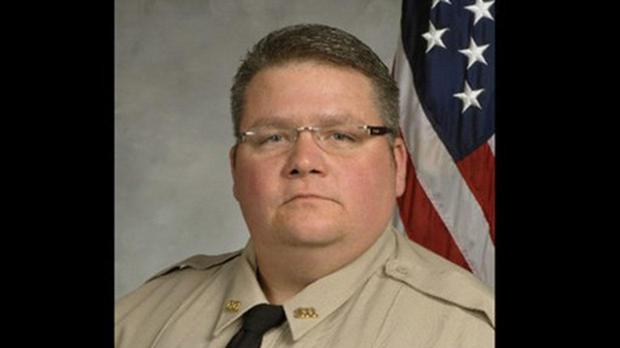 A male suspect started shooting at the deputies Sunday when they responded to a call that he was using a rifle to threaten two young men visiting his neighbors just outside the city of Byron, about 16 miles southwest of Macon, Georgia Bureau of Investigation Special Agent J.T. Ricketson said. The suspect, Ralph Stanley Elrod, was shot in the abdomen during the shootout.

Ricketson says 57-year-old Elrod is charged with murder and four counts of aggravated assault.  Investigators say Elrod is the father of a deputy in Jones County, northeast of Macon. It’s unclear whether Elrod has an attorney.

The Sunday incident began when two men visiting their aunt and uncle’s house for a cookout were riding a motorcycle and a four-wheeler on their relatives’ property, which backs up to the suspect’s property. The suspect allegedly threatened them with a rifle as they rode down a nearby road, prompting the men to return to the house and call 911.

Two Peach County sheriff’s deputies came to the home and took statements from the family and then drove over to the neighbor’s house about 5:30 p.m., Ricketson said. The deputies drove up the long driveway and got out of their vehicle. They’d taken only a couple of steps when a man came out of his house and began shooting at them with a handgun, Ricketson said. As far as investigators can tell, neither of the two deputies had withdrawn his gun.

The owners of the home where the young men were attending the cookout had walked to where their property abuts the suspect’s after the deputies left their house. They heard the gunshots, saw the deputies fall, and rushed back to their house to call 911 again, Ricketson said.

One of the three police officers who responded used a ballistic shield to protect himself as he approached the house, while at least one of the others positioned himself behind his patrol car.  The suspect walked out of his garage with a rifle and began shooting at the police officers, Ricketson said. One of the officers returned fire, hitting the suspect in the abdomen, after which the officers were able to subdue him and take him into custody, he said.

Ricketson said he obtained warrants on one charge of murder and four charges of aggravated assault on a police officer, but hadn’t been able to serve them because Elrod was still heavily sedated in a hospital intensive care unit Monday afternoon.

It wasn’t immediately clear whether he would face additional charges in the wake of Smallwood’s death.