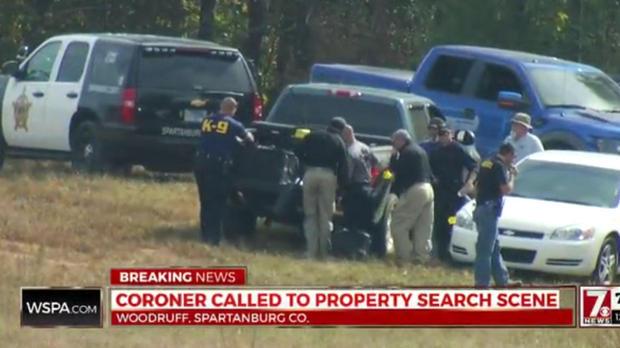 (CBSNews) WOODRUFF, S.C. -- A South Carolina coroner says a body has been found on the property where a missing woman was found chained inside a large storage container.

Spartanburg County Coroner Rusty Clevenger confirmed in an email to CBS News’ Crimesider that investigators are in the “beginning stages of the discovery of one body” on the Woodruff, South Carolina property where deputies responded Thursday after a tip from police investigating the disappearance of an Anderson couple.

Sheriff Chuck Wright said the rescued woman told investigators there could be as many as four bodies on the property, but police are still investigating. Wright said it’s possible the case is connected to other missing persons in the area and that authorities may be dealing with a “serial killer.”

Authorities were scouring the nearly 100-acre plot of land and by air, reportedly using a helicopter, an excavator and cadaver dogs. CBS affiliate WSPA reported the dogs “alerted” authorities to several areas on the lot.

Forty-five-year-old Todd Christopher Kohlhepp reportedly owns the property where the woman and the body were discovered and has been charged with kidnapping. He was arrested at his home in Moore after the woman was found. He has a bond hearing scheduled at 2 p.m. Friday.

Wright said the woman, who vanished with her boyfriend more than two months ago, was found alive Thursday morning inside a padlocked 30’ by 15’ metal container on the rural property, chained around her neck “like a dog,” the sheriff said.

The woman told investigators she had been held there against her will for two months. Investigators serving a search warrant there heard her banging from inside the container, Wright said. Her cell phone had at one point pinged on the property before going dead, reported WSPA.

“It was pretty emotional, to say the least,” Wright told reporters. “When she was found, she was chained like a dog – she had a chain around her neck.”

The woman’s boyfriend, 32-year-old Charles Carver, remains missing. The missing case gained national attention after suspicious posts appeared on Carver’s Facebook page that his family suspected were posted by someone else. The page was later taken down.

Wright said the woman knew Kohlhepp, but couldn’t detail the relationship. He said he didn’t believe the crime was random. Barnett reported the woman cleaned houses for Kohlhepp, who had worked as as a real estate agent and had a pilot’s license in South Carolina.

Kohlhepp was convicted of a 1986 kidnapping in Arizona that landed him on the sex offender registry.

South Carolina’s sex offender registry lists the Arizona offense as the reason Kohlhepp is in the database of sex offenders. It indicates he was a juvenile offender, convicted in 1987 when he was a teenager.

Matching online prison records from Arizona show that Kohlhepp served about 14 years for the felony and was released in 2001.

The Arizona records show the kidnapping happened in November 1986 in the Phoenix area. The records don’t elaborate on the crime, but do list some violations while in prison. The records say he destroyed property and fought on a number of occasions while incarcerated in 1991 and 1988.