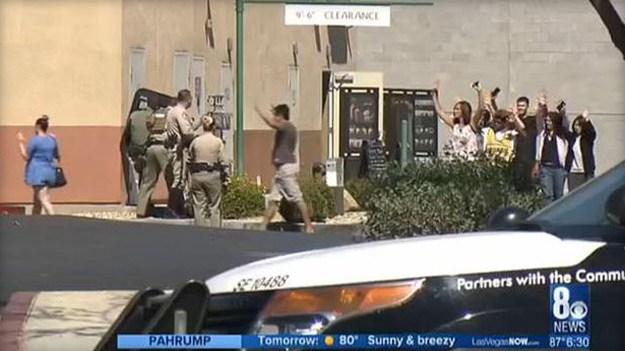 (CBSNews) LAS VEGAS -- Police say a 34-year-old ex-convict is accused in a weekend shooting inside a Las Vegas Starbucks after his credit card was declined at the drive-thru window.

Pedro J. Garcia was jailed Monday pending an initial court appearance on murder, robbery, burglary and weapon charges in the 11:30 a.m. Sunday shooting at a Starbucks in a commercial center several miles west of the Las Vegas Strip.

Officer Larry Hadfield says detectives are trying to determine if there’s a connection between Garcia and the 41-year-old man killed with a gunshot wound to the chest.

Hadfield says Garcia went into the store after his payment card was declined in the drive-thru. CBS affiliate KLAS reports Garcia then got into the argument with the victim, who was a store customer, not an employee.

Police allege the suspect then called 911 in an attempt to throw off investigators, giving them a fake suspect description, according to the station. That call reportedly led officers initially to treat the scene as a hostage or barricade situation, reports KLAS. Customers were seen walking out of the coffee shop with their hands in the air.

After interviewing witnesses on the scene and receiving information that conflicted with the 911 call, police say they realized the suspect was among the group that had evacuated the building. They took Garcia into custody, and say Garcia told police he had a bomb in his backpack, prompting a response from federal agents and a bomb squad.

Bomb technicians used a robot to search the bag and didn’t find anything dangerous, the station reports.

The name of the victim wasn’t immediately made public.