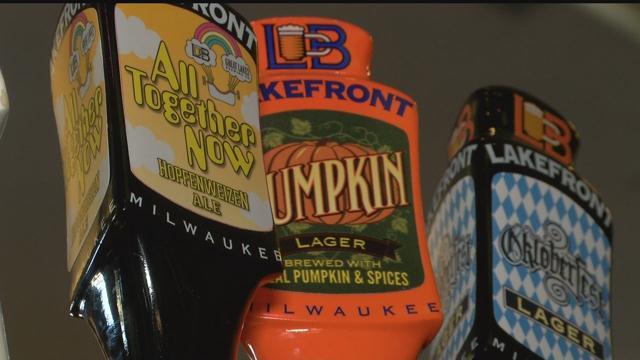 Fall is nearly upon us and you know what that means: pumpkin-flavored everything.

But a possible pumpkin shortage could mean less of those products including pumpkin beer.

CBS 58 News has been chatting with the people over at Libby's - that's the main pumpkin brand you might recognize in the store - and they say already there's not much pumpkin on store shelves because of last year's shortage.

But in talking with Lakefront Brewery - they say they've planned for times like this.

Lakefront Pumpkin Lager is already on tap at their brewery, it's frothy foam like whip cream on the orange-tinted beer.

Lakefront Brewery started making it in annually in 1989 and customers have made it their most popular seasonal brew, Lakefront Brewing President Russ Klisch said.

Lakefront Brewery orders its pumpkin well in advance to make sure they meet demand, Klisch said.

"We'll usually get that in by April or May. I know, I've heard there might be a shortage this year so we get that definitely early enough. In the past years we've run into this problem where we're buying it too late," Klisch said.

Pumpkin availability is based on weather and Nestle - which owns Libby's - says this year's crop looks promising but it's still too early to forecast.

"As we rebuild our inventory, we’ll begin releasing the 2016 Libby’s pumpkin to our retail partners, through successive waves of distribution. Usually the first distribution for a new harvest occurs in late September," a statement from a Nestle representative read in part.

But Klisch isn't especially worried about running out. Like everyone else right now they're buying 2015's canned stock.

But never say never. He remembers 10 years ago when they did almost run out.

"And I remember going out and buying these cans of pumpkin...and scooping everything out for our batch that we needed. I don't know how many hundreds of cans we had to open up," Klisch said.

"I think we bought out every Pick 'n Save in the city," Klisch said.

At Lakefront Brewery they try to have their first batch started in the first week of June so it's ready to go just after the Fourth of July, Klisch said.