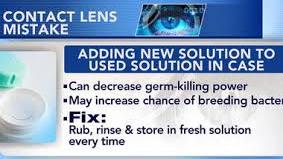 (CBSNews) -- A British man was forced to have his eye removed after a contact lens infectionspiraled out of control, and now he’s sharing his story so others won’t suffer the same consequences.

Long-time paramedic Andrew Carthew, 59, wore prescription contact lenses for years and said he was always careful not to sleep or shower or swim with them in. But in June of 2015, he woke one morning with a “weepy eye,” the UK’s Daily Mail reported online.

He thought it was conjunctivitis, a common, treatable eye infection.

But the eye became painful and sensitive to bright light within a day or two, Carthew said. He ended up in the emergency room. His symptoms didn’t improve and he soon learned he had a rare infection called acanthamoeba keratitis — a serious condition caused by an amoeba.

Symptoms of acanthamoeba keratitis include:

Doctors can diagnose the infection based on symptoms, or the amoeba can also be identified by a scraping of the eye or by viewing it through a process called confocal microscopy.

The infection is treated with one or more prescription medications. In Carthew’s case, antibiotics did not help, so his doctors then performed a corneal transplant. But the infection was so severe they finally had no choice but to remove his eye.

After a year in and out of medical care and adjusting to the loss of the eye, UK news outlets are reporting that Carthew is now getting the word out to help other contact lens wearers avoid the same fate.

The parasite is common in nature, where it can be found in lakes and oceans, the soil and even air. It’s also present in tap water. About 85 percent of infections occur in people wearing contacts that got contaminated.

Normally, only about one to two cases of infection per million contact lens users occur in the United States, according to the U.S. Centers for Disease Control and Prevention. But between 2005 and 2007, an acanthamoeba keratitis outbreak infected at least 138 people in 35 states.

About 41 million Americans wear contact lenses, and while they are typically a safe and effective alternative to glasses, they can cause serious problems if wearers don’t follow instructions on how to care for them.

“While patients, especially younger patients, are really excited about being fitted with contact lenses, I stress to them that contact lenses are medical devices that have to be properly fitted, evaluated and that they must adhere to proper contact lens care,” Dr. Andrea Thau of the American Optometric Association (AOA), told CBS News in August when a new CDC report came out warning contact lens users to be vigilant about eye care.

Here’s what to do to avoid infections and other vision complications, according to the AOA:

You can’t be careful enough, as Carthew learned. A health professional himself, he said he followed contact lens cleaning guidelines, but he said that it’s possible he handled his lenses with unwashed hands at some point, which might have led to his infection.