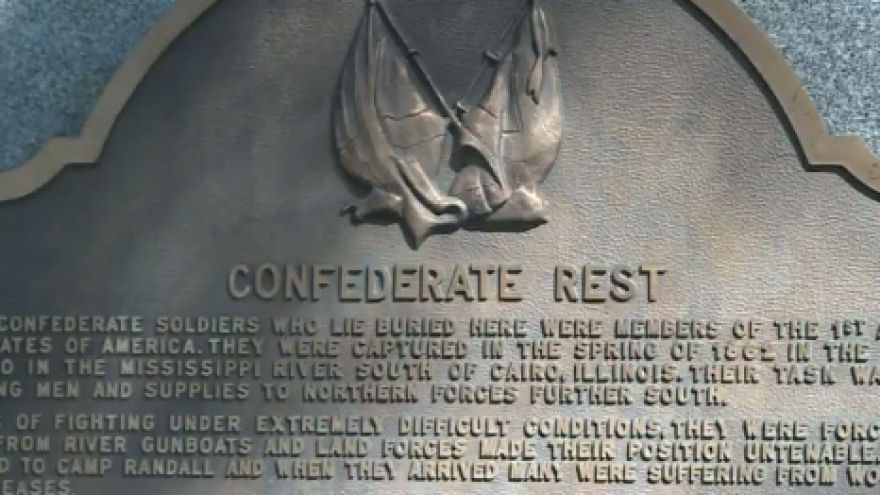 MADISON (AP) — The mayor of a traditionally liberal Wisconsin city has ordered the removal of a cemetery's monuments to Confederate soldiers, saying the Civil War was "a defense of the deplorable practice of slavery" and "an act of insurrection and treason."

One of the monuments in the state capital of Madison was taken down Wednesday. The plaque, called "Confederate Rest," lauded the Confederate soldiers buried at the Forest Hill Cemetery as "valiant." The other, a large stone monument that lists the names of the soldiers, will require heavy machinery to be removed, Mayor Paul Soglin told The Associated Press on Thursday.

"We will reinstall a proper marker with their names but one that does not speak of the Civil War as an act of heroics by the Confederate insurrection," Soglin said.

His decision to have the monuments taken down comes as cities nationwide are removing Confederacy-related ones following last weekend's deadly confrontations at a white nationalist rally in Charlottesville, Virginia.

Soglin said he agrees with other mayors around the country who are "speaking out and taking action."

"We are acknowledging there is a difference between remembrance of history and reverence of it," he said.

The stone monument has been in the cemetery for more than a century, Soglin said. A woman with Confederate ancestors would visit the cemetery to tend to the soldiers' graves, and her friends installed the monument, he said.

The plaque that already was removed was installed in 1981 by a donor with relatives who fought in the Civil War, the mayor said.

Even before the violence in Charlottesville, Soglin said city officials had discussed removing the monuments. He said those events led him to conclude that a "very decisive decision had to be made quickly."