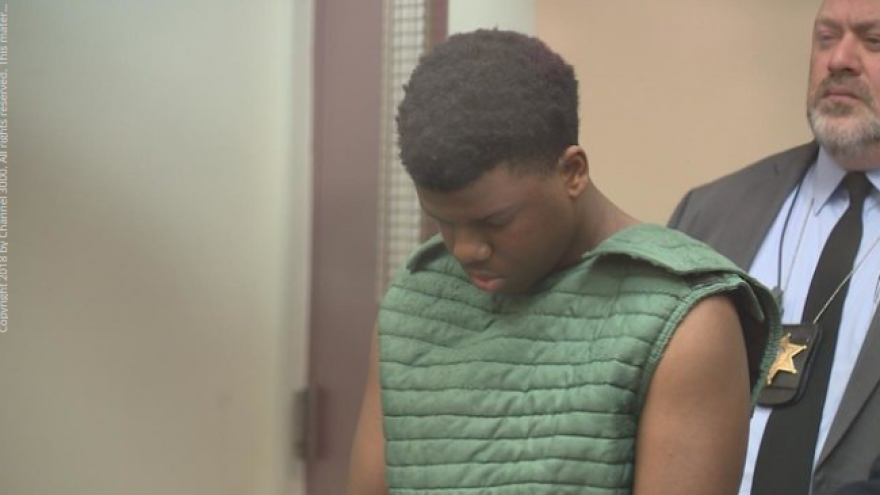 MADISON, Wis. - A 7-month-old baby boy cannot breathe without assistance while recovering from injuries doctors are saying are non-accidental, according to a criminal complaint.

The teen father -- James E. Johnson, 19, of Madison -- is facing charges of one count of first-degree reckless injury, according to the complaint. During his preliminary hearing Thursday, he stood mute and a plea of not guilty was entered on his behalf.

Officials said they were called to the 1700 block of Northport Drive around 3 a.m. Wednesday for a report of an infant in distress. When officials arrived, the mother shouted for them to "come in" and officers found the baby making snorting noises and with fresh blood on his lip, according to the complaint.

Court documents say police found damage to two walls in the bedroom of the home, and one appeared to have a hair embedded into it.

After doctors determined the baby's injuries were non-accidental, a child-abuse pediatrician examined the boy. This doctor found two complex skull fractures and three other rib fractures that appeared to be more than 10 days old. The baby was diagnosed with physical abuse of a child and abusive head trauma, according to the complaint.

Johnson told an officer he had accidentally dropped the baby in the hallway outside of the bathroom in the apartment that night and said he had probably "sunk his teeth" into the baby's face while hugging him.

After this, officials told Johnson the extent of the baby's injuries and about the damage they had found in the wall. Johnson shook his head and exhaled heavily.

When an officer confronted Johnson asking him, "Did you just lose it?" the officer said Johnson nodded his head yes and said, "It's over."

Documents show Johnson told the officer, “I tossed him on the bed and he hit the wall” and admitted to hitting the baby with his fists multiple times.

Johnson told officials he was upset with the baby because "He's more attached to his mom than he is to me," according to the complaint. Officials also asked if they were going to find any healing injuries on the baby boy, and Johnson said, "Not that I know of."