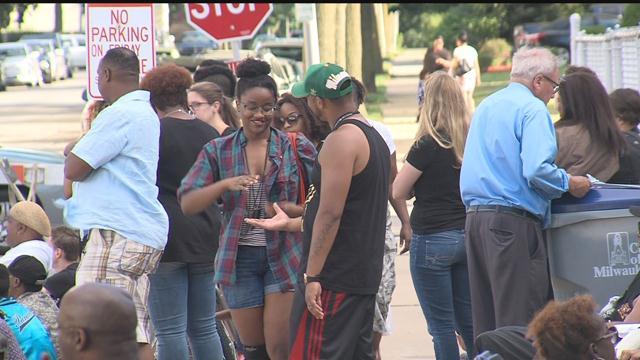 Communities across the county are mourning the death of the Dallas police officers and the two men killed by police in Louisiana and Minnesota earlier this week.

And in Milwaukee, people are hoping these tragedies will lead to change.

We spoke with people at the Jazz in the Hood event and while they say they're traumatized by these shootings, they're also choosing to stay positive.

"I wish everyone could just come together and be united as a people," said community member Quantari Johnson.

"It's about love. If we don't show love, neither one of us on God's earth will make it," said Curtis Bruce.

But that was just one moment-as those we spoke with say they're hopeful these tragedies will open minds and hearts and lead to change.

"You can be pro-black and pro-cop. That's first.  One bad apple doesn't ruin the whole bunch," said Rahim Islam.

"We can choose to say I accept what's going on but I also accept I have the choice to be positive and optimistic and do something with the God given talents I have," said Melissa Goins, organizer of Jazz in the Hood event.

Representative David Bowen says people are getting so distracted pointing fingers which is stopping conversation and adding fuel to the fire.

"Everyone deserves a chance to go home at the end of the night. We're moving toward a point where people serving our community and in our community are not making it home," he said.

He says its time to start addressing the real root of the problem for real change.

"There has to be more community building and actually building authentic relationships in our communities, we're not doing that right now and its  time to start," he said.

Bowen also said he wants to make it clear: anyone who stands for justice would never justify the killing of anyone else, especially not police officers.