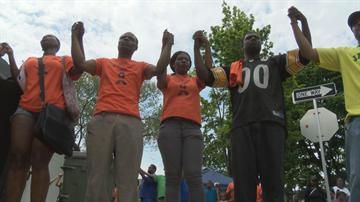 MILWAUKEE -- Monday, friends, family and neighbors gathered to dance, sing and support Sierra Guyton's family on the same block where the 10-year-old was shot last week.

\"Today was a sign for the family that we're not going to go forward business as usual,\" Denisha Tate said.

Many people in the crowd wore orange shirts that read, \"Let our children live,\" a message Tate hopes will spread across the city.

\"Those who are doing criminal activity and who aren't thinking about the children, it's like a reminder, a  billboard,\" Tate said.  \"Whatever you're doing, stop it.\"

Tate works with the Boys and Girls' Club where Sierra is a member.  As soon as she learned the 10-year-old was shot, Tate worked to create the t-shirts and organize the rally.

\"Someone knew there was a gun with bullets in the hands of at least two perpetrators,\" Tate said.  \"Someone knew this was the  block they were going to have an altercation on and no one stopped anybody.\"

Community members, police and local leaders gathered just steps from where Sierra was shot.  Speakers called on  people to step forward and take their neighborhood back.

Cross lived in the neighborhood for seven years.  Now she works for a group dedicated to rebuilding the community and bringing in jobs.

\"This is not a Metcalfe park issue,\" Cross said.  \"This is a citywide issue and it's going to take everybody in this city to start  to look at what causes this.\"

Children played on the same equipment Sierra used -- a playground this neighborhood expects her to use again.

\"We're proclaiming that she is going to come home and that she will be able to tell people, 'It's not OK,'\" Tate said.