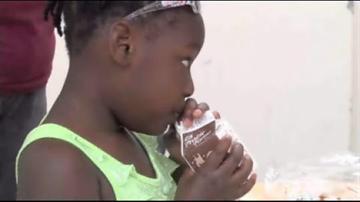 WEST ALLIS -- Eating a balanced meal is part of the routine at summer camp's across Milwaukee County.

\"It's really gratifying when you sit down and see 130, as many as 300, 400 children being fed,\" said Hunger Task Force director Sherrie Tussler.

For 10 years, the Hunger Task Force has worked to end childhood hunger while kids are out of school, all for free.

\"We've got kids all over this city who don't have anywhere to turn and it's super important we're there for them,\" continued Tussler.

The summer food service program only allows the Hunger Task Force to provide breakfast and lunch.

\"It's important for parents to realize if they don't have enough food in their house, they can go to any park or school that has a free summer meal sign out front without enrollment and their children can get breakfast lunch and supper, \" Tussler said.

It's nourishment that gives kids the energy have fun and learn.

Summer camp leaders use the meals to teach about how to make healthy choices.

\"When they sit down to have their breakfast, they can be aware, 'oh, this is a grain by the color,'\" Reed said.

The Hunger Task Force says fulfilling its mission is possible because of community donations.

All of which are distributed free to local sites right here at home, efforts that no longer go unnoticed.

\"I didn't even know at first the hunger task force was a partner and they were providing,\" continued Reed. \"Without the Hunger Task Force, I wouldn't know where the breakfasts would be coming from.\"

Parents in need can dial 211 to find a summer meal program or food pantry near their home.