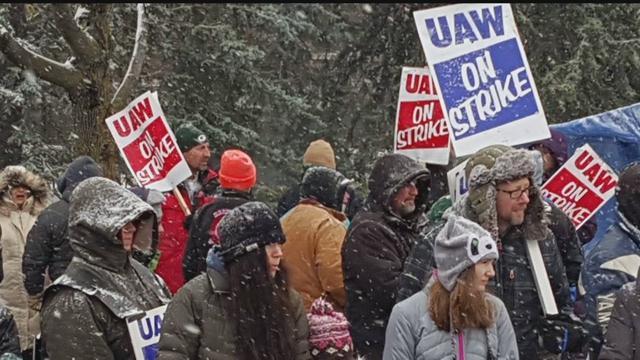 While thirteen workers have crossed the picket line at Kohler Company more than 2,000 others continue the strike.

The strike is currently on day seventeen.

There has been no announcement of any movement on labor talks.

Striking workers are rotating in shifts of six hours.

Workers said they have no plans to back down.

“This weather's actually kind of nice. I prefer the cold weather. As far as paychecks go, we haven't really missed a paycheck yet because we go every two weeks for our paychecks. This Friday we'll actually get a one week paycheck because we walked mid-pay period," said one 30-year employee picketing.

Striking workers have been supplied with food through community member donations.

Strikers have bonded and made new community connections on the street.

The union will start giving around $200 a week to members striking.

Kohler Company and union leadership have not returned to serious negotiations since the strike vote.

"I tell you this, my wife works in retail and she can tell the difference. Of course everybody's cutting back a little bit and spending what they have to. Who know how long this will continue till," said one striker.

This week union leaders circulated the names of the people who returned to work.

But the leaders said they are not calling for retribution.

Instead they are focusing on their message: asking for pay raises and a standardized pay-system for all employees.

They are, also, complying with certain requests from the village.

"Yeah they're making our lives a little more difficult. Right now they went with some different structures. We had some homemade structures out here and they kind of eliminated that,” said one picketer.

A food bank also opened today for union members at their union hall.

It is stocked through community donations.

That is open for anyone to use but for now many of these people said they still feel pretty secure.