Community Comes Together to Raise Funds for Local Firefighter 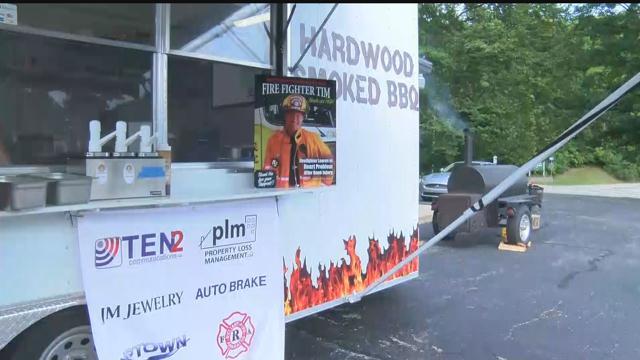 There was a line of people out the door at the Fat Boy BBQ joint in Slinger on Friday to raise money for a local firefighter.

To many people he may just be known as a firefighter, but here in Slinger he's known as Firefighter Tim.

He is known as the man who goes to local schools and teaches kids about fire safety.

Customers are dropping donations in the boot to help a fellow community member.

“I tried to make it always on my own in the past but this time the community has stepped forward and helped me out tremendously,” said Tim.

Timothy Roskopf is a firefighter with Slinger's volunteer fire department for more than 19 years, and he recently underwent his second heart surgery.

“I recently had an aortic aneurysm. It's my second heard surgery in the last years and this one has really put me down,” said Tim.

Doctors orders have Roskopf on limited activity, leaving him out of work for the past 9 weeks.

It was a tough situation because he has kids, a mortgage, and big medical bills.

Steve Wegner, the owner of Fat Boy BBQ worked with Tim in the department years ago and says his dedication to the career and the community was one that couldn't go unseen.

This fundraiser was supposed to start at 4, but so many people turned out that the restaurant opened early at noon to start sales.

All of Friday's proceeds go to help Firefighter Tim.

Fat Boy BBQ will be open until 7 tonight.

you can't make it out, there is a link to his gofundme.