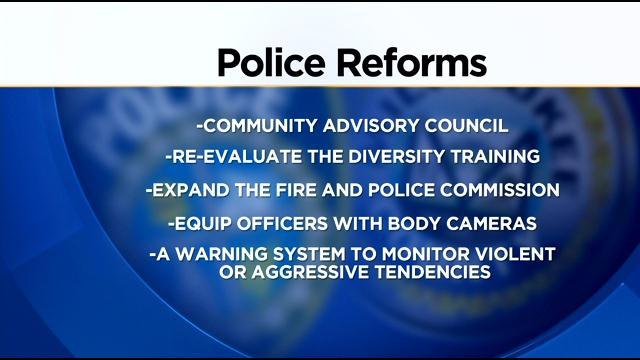 With the district attorney's decision on Monday, five Milwaukee Common Council members have joined together to come up with a number of changes for Milwaukee Police.They hope these changes will help better protect the community and create a better relationship between police and the people they serve.

They believe the process did not meet the standards of transparency that the public deserves, and it took too long.

In a press release they said the decision is yet another unfortunate example of the need to improve relations between police and the community.

Here are the proposals:


-    The creation of a community advisory council to advise the Milwaukee Police Department on better strategies for maintaining community-police relations.

-    Re-evaluating the diversity training that is provided to police officers. We will pursue the issuance of a Request for Proposals to seek a new provider for such training.

-    Expanding the Fire and Police Commission that governs the Milwaukee Police Department from seven to nine members. It's often forgotten that the Milwaukee Common Council has no direct authority over MPD policies or the discipline of MPD officers. That responsibility is delegated to the Fire and Police Commission, which needs to be expanded in order to make it more inclusive. Starting with the new FPC executive director who must be hired, we will ensure that all new members of the commission will not be confirmed without a comprehensive public vetting.

-    Equipping every Milwaukee Police officer with a body camera to record their interactions with members of the public. We will seek funding for this initiative through asset forfeiture or any other avenue we can identify.

-    The creation of a comprehensive and effective early warning system to monitor individual officers on the police force for indicators of violent or aggressive tendencies. Complaints against individual officers, performance reviews and other metrics must be used to identify officers who may pose a threat to the public and provide those officers with the retraining and counseling that they need. The ACLU has recommended the enactment of such a policy.

\"The Milwaukee Police Department welcomes the aldermen's public interest in our continuing efforts to provide the city with police services of the highest ethical and professional standards and notes that the substantive changes suggested in [Monday's] press release have either been implemented or are underway.\"
Share this article: