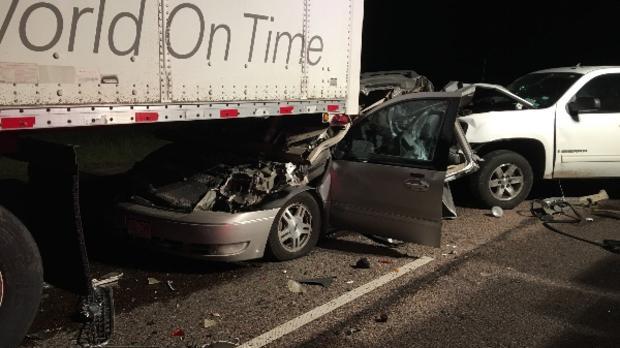 Ryan Bragazzi was driving his fiancé and two young daughters to Denver International Airport for a surprise trip to Disney World when they were hit.

"They did absolutely nothing wrong and they received the brunt end of this for just being in the wrong place at the wrong time," Colorado State Patrol Trooper Josh Lewis told CBS Denver.

The crash happened just north of Monument around 2:30 a.m. While stopped in traffic as troopers investigated a separate DUI crash, another drunk driver collided with Bragazzi's minivan at a high rate of speed. That collision forced the van underneath a semi.

"The result was serious injuries on multiple parties. We're certainly hoping for the best with everyone who was involved with it," Lewis said.

All four passengers, including the 5 and 7-year-old girls, were taken by ambulance to an area hospital. According to a GoFundMe page created by a relative, Bragazzi is in the ICU with several broken ribs, vertebrae and a laceration to his back. His young daughters are being treated at a Children's Hospital.

"A DUI can happen at any time at any location," Lewis said. "It is not limited to just a Friday or Saturday night or a special weekend."

What was supposed to be a special weekend for the young family turned into a horrifying scene. Medical bills are mounting, so relatives are hoping to raise $8,000 to help.

Those interested in donating can visit the GoFundMe page.