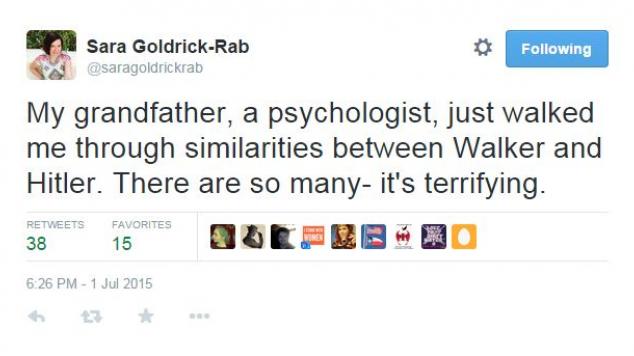 A University of Wisconsin-Madison professor, and affordable college advocate, is now taking heat after a series of tweets she sent to incoming freshmen about changes to the System under the new state budget.

The chairman of the College Republicans of UW-Madison, Anthony Birch, says the UW professor harassed those students on Twitter by telling them faculty will be leaving due to potential changes in tenure. He's calling the professor's actions disgusting and repulsive.

Birch says, \"Growing up were taught when we do something wrong we acknowledge that and move on. So that's all we're looking for an acknowledgment that comparing anybody to Adolf Hitler and interjecting yourself into conversations with high school seniors and harassing them on twitter, both of those things are completely inappropriate.\"

Professor Sara Goldrick-Rab's tweets came last month, and they've since been taken down. Birch explains he was contacted Wednesday by one of the students Goldrick-Rab interacted with on Twitter. Birch says that student does not want his name publicized.

Goldrick-Rab is an outspoken critic of the changes made to UW-System under the new state budget signed by Governor Scott Walker.  She hasn't shied away from using Twitter to voice her opinion.

In a tweet from July 1st, she points out she's found similarities between Walker and infamous Nazi leader Adolf Hitler.

Wednesday Blank issued this statement, \"I feel compelled to respond to those who may question whether the University of Wisconsin-Madison is still a great place to learn and to teach. The answer is a resounding yes – and I know that because I hear it daily from students, faculty members and staff as well as alumni, donors and friends. Any institution has its critics, and especially in social media, it’s important to remember that the loudest voice usually isn’t the most accurate. The Badger community is strong and continues to stand for excellence in education, in research, and in community outreach.”

CBS 58’s David Ade spoke to a clearly upset Goldrick-Rab over the phone Thursday morning, but she didn't want to do a formal interview.

Just one week ago, the UW School of Education posted an article highlighting the work Goldrick-Rab is doing to make college more affordable and accessible for low-income students.

Last month she was in Washington D.C. sitting on a panel discussing college affordability. That’s something else the university highlighted, and which came after the now deleted tweets to the incoming students.

Thursday evening, the UW-Madison University Committee of the Faculty Senate issued the following statement, “As faculty members at the University of Wisconsin-Madison, we support free speech and diversity of opinion, as has been our tradition. Such freedom requires responsible behavior and in this respect we are deeply dismayed with the actions Prof. Sara Goldrick-Rab has taken toward students and faculty on Twitter in recent weeks to discourage them from coming here. While claiming to stand for academic freedom, she has in fact damaged that principle and our institution with inaccurate statements and misrepresentations. We stand with our fellow faculty, staff, and students who have devoted themselves to maintaining and building on our university’s extraordinary and distinguished record of teaching, research, and service to the people of Wisconsin and beyond.”