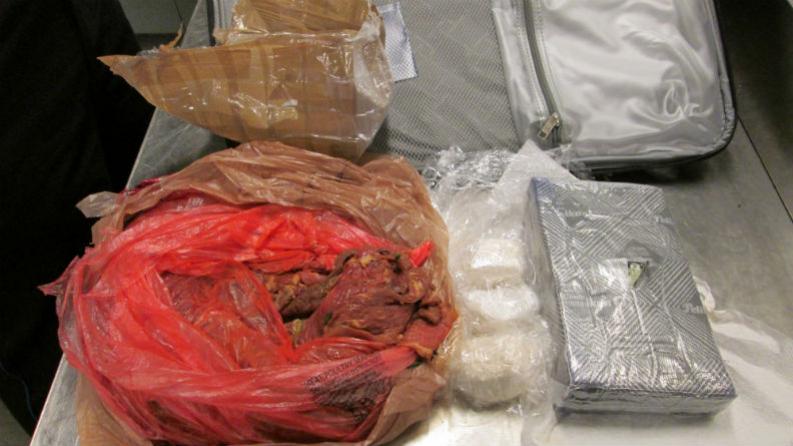 Most people see a nice cut of beef and think, \"Gee, I should hold a barbecue this weekend.\"

Other people see raw meat as the perfect place to hide drugs.

A 24-year-old man was arrested at Mineta San Jose International Airport in California after airport security officials discovered about 3 pounds of cocaine smuggled inside raw meat in his checked luggage, according to the Transportation Security Administration.

The man was attempting to travel with his raw meat/cocaine combo from San Jose, California, to Seattle on November 8, the TSA said.

\"TSA's screening procedures, which are governed by federal law, are focused on security and are designed to detect potential threats to aviation and passengers,\" spokesman Ross Feinstein wrote in an email.

\"As is common practice, TSA notified the San Jose Police Department (Airport Division) of the discovery, who responded and took possession of the cocaine,\" Feinstein said.

The TSA screens every bag that will eventually enter a plane, whether it is checked or the passenger carries it on board. Though officers are looking for bombs and other devices that can take down a plane, they also often find other illegal items.

A woman flying out of New York's John F. Kennedy International Airport in September attempted to hide two .40 caliber handguns and 33 pounds of marijuana inside baby wipes, coffee, floor dusting sheets, lemonade mix, iced tea mix, a box of cat litter and a box of laundry tablets, according to the TSA.

In May, the agency said, a woman departing Oakland International Airport tried getting three bags full of 81 pounds of marijuana past TSA officials.

One particularly creative passenger scooped out the middle of a jar of peanut butter and replaced it with marijuana, according to the TSA blog.

Drugs aren't the only product that people are trying to bring on board without permission. In a more scholarly approach to smuggling, an old book was hollowed out to make room for a handgun at Honolulu International Airport in March 2012.

The TSA is catching passengers with more guns than ever before. The 1,855 firearms seized from passengers' carry-on luggage in the first 10 months of this year has surpassed the 2013 total of 1,813 seized firearms, Secretary of Homeland Security Jeh Johnson said in a statement.