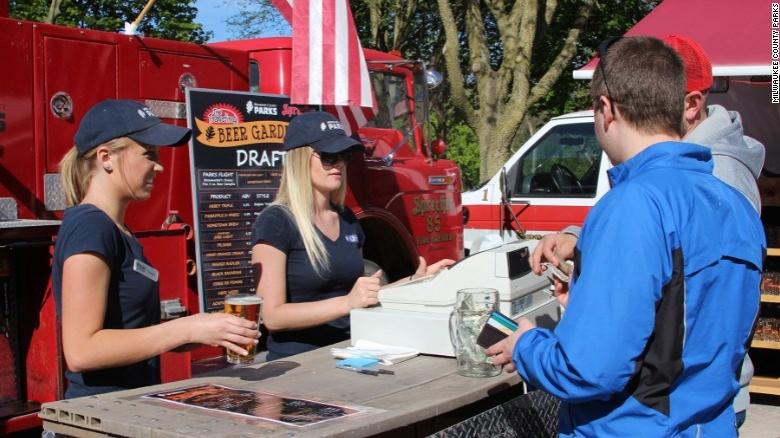 Here is the full story:

(CNN) Purists, rejoice: This year marks the 500th anniversary of the Reinheitsgebot, known in English as the German Beer Purity Law.

The set of regulations dates back to a 1516 decree outlining three permissible beer ingredients: hops, barley and water (yeast, while not specifically mentioned in the text of the law, is also acceptable).
This was a way to ensure the quality and integrity of German beer and to relegate grains like wheat and rye to baking bread instead of brewing beer.
Today, the law functions more as a savvy marketing device, allowing German breweries to recount the long history of their craft to an increasingly knowledgeable consumer base.
"The Reinheitsgebot is still very relevant today, as consumers increasingly focus on the purity and quality of ingredients that go into what they eat and drink," says Udo Schiedermair, brewmaster of German pilsner Radeberger.
Of course, you need somewhere to drink all that beer, and what better place than a beer garden?
"In Germany, it is a local way of socializing, having a good bite to eat, regional specialties, and enjoying a few beers," says Schiedermair.
"Most of the beer gardens and beer halls I visited in the U.S. [...] are concept-driven and superbly executed, be it bohemian-style, American craft, traditional Bavarian, or just a modern interpretation of a social get-together on communal tables," he says.
Indeed, the long, warm, sunny days of summer have beer gardens packing in thirsty guests.
From traditional German-style beer gardens to more modern spots that serve Reinheitsgebot-compliant brews as well as a wide selection of rule breakers, here are some prime spots for a sampling of sausage and a few steins of beer.

Bohemian Hall has been around since before Prohibition, keeping the Czech and Slovak beer garden tradition alive in the borough of Queens for nearly a century.
Today, it stands as one of the larger beer gardens in New York City, with Czech favorites like fried cheese ("smazak") and goulash served in a large outdoor area at picnic tables, along with around 20 German, American and classic Czech beers like Krusovice and Staropramen on draft.

This brand-new beer garden is located at The Park, a recently opened outdoor area on the Las Vegas Strip that features various dining and entertainment options, along with easy access to the new T-Mobile Arena.
In addition to a huge variety of local and international beers, Beerhaus features sausages and sandwiches, a full cocktail menu and outdoor games like Cornhole and Giant Jenga.

Asbury Festhalle and Biergarten offers an Austro-Hungarian take on the storied beer hall tradition, with a 9,000-square-foot outdoor rooftop area.
This cavernous Jersey Shore den of suds is the latest venture from Andy Ivanov, who also operates Pilsener Haus & Biergarten in Hoboken.
About 40 local and international draft beers are featured, with 60 bottles available as well. Chef James Avery, formerly a sous chef on Fox's "Hell's Kitchen," has put together a menu that focuses on modern takes on Old World cuisine.
Don't arrive expecting to catch the game, as there are no TVs at the bar. Instead, the emphasis is on the communal experience that is the essence of the beer garden.

Bay Street Biergarten combines the best elements of the traditional beer garden with the unique flavor and characteristics of the South.
Located in a rebuilt version of the Wilmington Railroad Depot that was blown up during the Civil War, this beer garden focuses on craft beer and modern Bavarian-Southern fusion food, including brats, fried alligator and "smoked bier wings."
Come for the brews, stay for the featured nightly events including Cornhole tournaments, live bands and trivia nights.
Presidio Social Club, San Francisco, California
Every Wednesday from July 13 through August 31, thePresidio Social Club will partner with San Francisco brewery Fort Point Beer Company on a beer garden on the restaurant's outdoor patio.
Hopefully, the famous San Francisco fog will stay away as patrons sit at communal tables and enjoy Fort Point beers in cans or on tap, and munch on some Texas-style BBQ from Chef Wes Shaw, including a pulled pork sandwich and 13-hour smoked beef brisket.
Kaiser Tiger, Chicago
"Running a beer garden is a fun operation," said Kaiser Tiger owner Chris Latchford, "especially in a city like Chicago where people truly appreciate the good weather when it comes around."
Kaiser Tiger doesn't shut down in the winter, however, instead offering curling sheets for fans of the Canadian ice sport, fire pits, hot whiskey and bacon-wrapped s'mores when the weather gets cold on the outdoor patio.
The beer list focuses on smaller craft offerings, but throws some German brews in the mix as well.
If you're hungry, try the "Whole Bomb," a five-pound monstrosity of beef and pork sausage stuffed with bacon.
Prost!, Portland, Oregon
In a city with a staggering amount of craft beer to choose from, Prost! stands out as a beer garden that combines the hipster sensibility that Portland is known for with German tradition.
Portland is also home to countless food carts, something owner Dan Hart decided would complement the beer garden nicely.
"We have a tiny kitchen, so I decided to embrace it and created an open-door policy," he said. "Our guests can order whatever they'd like to eat at the carts, then gather around the tables at Prost! with a beer as they eat."
The beer menu keeps things focused on German offerings like Hofbrau, Bitburger and Spaten.

Milwaukee, a city that has historically been home to a large Germany community, has an innovative take on the beer garden.
Milwaukee County Parks operates a Traveling Beer Garden program, sponsored by the local Sprecher Brewing Company, which sets up in various parks throughout the city.
This summer, the Roll Out the Barrel Tour will be at four parks for a month each, and the Pass Me a Pint Tour will hit eight parks for 12 days each. At each stop, visitors will find food, entertainment, plenty of beer and a family-friendly environment.

The Biergarten at The Standard, Downtown LA, Los Angeles

Downtown Los Angeles might not be the first place that comes to mind when thinking about beer gardens, but the hip Standard Hotel there has one on tap.
The Biergarten at The Standard is on the hotel's rooftop, and offers a small menu of wursts and pretzels, as well as German-themed cocktails, beer and waitresses decked out in a t-shirt version of the traditional Bavarian dirndl dress.
The clientele here is a mixture of hotel guests and locals looking for a beer garden that's both sceney and casual.
Share this article: