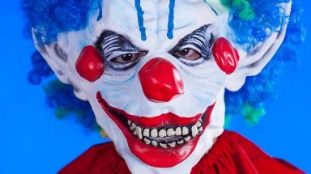 Clowns reportedly taunted children with a knife and gun during recess at Greenwood School in Waukegan on Wednesday.

According to Waukegan Police Department the incident happened at 1:50 PM.

Children at recess reported to staff that three individuals dressed in clown masks stood at the edge of the property and taunted them.

According to Waukegan Police Department, the children reported that one of them had a knife, one had a briefcase, and one had a gun “in his pocket”.

Police said it is unknown if the knife was real or if the one clown was armed with a handgun.

The school was briefly placed on lock down until officers could check the immediate area.

The children also reported that the trio threatened to return on Friday to “kill them”.

It is possible that the three left in a black SUV.

The gender and race of the suspects is unknown. The Waukegan Police will be providing extra watches during patrol shifts at all area schools for the time being.

This incident is being taken seriously and is being investigated by the Criminal Investigations Division (CID). If anyone has information of this incident they are asked to call the CID “Tip-Line” at 847-360-9001.