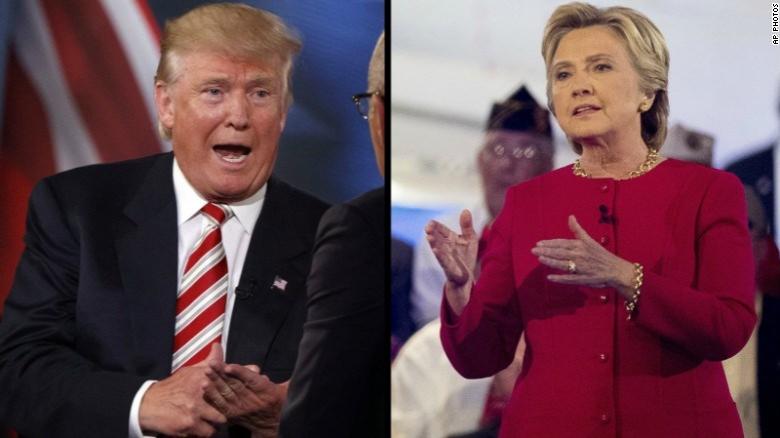 Washington (CNN)Hillary Clinton and Donald Trump clashed Wednesday over national security issues that exposed deep divides about how to manage the military and conduct foreign policy in an increasingly complex world.

The forum offered a preview of how the two candidates will present themselves to the country when they appear on stage September 26 at the crucial first presidential debate. The gulf between them was especially apparent when the discussion centered on Russia and combating ISIS.

Clinton has repeatedly slammed Trump on the campaign trail for his embrace of Russian President Vladimir Putin. But at the "Commander in Chief" forum hosted by NBC News, Trump once again praised the Russian leader in comparison to President Barack Obama.

"Certainly, in that system, he's been a leader, far more than our president has been a leader," Trump said.Trump has also presented varying answers about his plan to deal with ISIS and moderator Matt Lauer pressed the Republican nominee on the issue.

"I have a plan ... Look, I have a very substantial chance of winning," Trump said. "If I win, I don't want to broadcast to the enemy exactly what my plan is."

With less than three weeks until the debate, Trump seemed at ease with the freewheeling style he has often demonstrated on the campaign trail. He caused a stir by defending a tweet that implied military sexual assault is a result of women serving in the military. Meanwhile, Clinton pivoted from questions about her email server to focus on her vision of a robust national security policy.

Clinton, who said defeating ISIS would be her "highest terrorism goal," spoke of using air power and regional alliances to defeat the group.

"We've gotta do it with much more support from the Arabs and the Kurds who will fight on the ground against ISIS," she said. "We have to squeeze them by continuing to support the Iraqi military. They've taken back Ramadi, Fallujah. They've gotta hold them. They've gotta now get into Mosul."Trump repeated his claim that he was "against" the Iraq War, an assertion that has been repeatedly debunked. He praised the military campaign in Iraq in the first months after the invasion.Trump has repeatedly attacked Clinton over her support for the war, saying it showed poor judgment. Clinton, when asked about her vote to authorize the war, said: "I have said that my voting to give President Bush that authority was, from my perspective, my mistake," she said. "I am asking to be judged on the totality of my record."

She added: "I view force as a last resort, not a first choice. I will do everything in my power to make sure our men and women in the military are fully prepared for any challenge they may have to face on our behalf, but I will also be as careful as I can in making the most significant decisions any president and commander and chief can make about sending our men and women into harm's way."Trump said at the forum that he'd be open to "working" on a way for undocumented immigrants to serve in the US military -- a sharp contrast to his tone during a speech in Arizona last week where he said he would focus on deporting undocumented immigrants from the country.

"I think that when you serve in the armed forces, that's a very special situation," Trump said. "I could see myself working that. Absolutely. Now we have to vet very carefully, everybody would agree with that."A woman in the audience asked Trump during the forum what he'll do to stop the "20 veterans" from committing suicide daily.

"Actually it's 22. It's almost impossible to conceive that this is happening in this country," he said. "We're going to speed up the process, we're going to create a great mental health division. They need help."

Clinton, also asked about the issue, pointed to her recently rolled out mental health policy agenda.

"I have a whole section devoted to veterans' mental health. And we've gotta remove the stigma. We've gotta help people currently serving not to feel that if they report their sense of unease, their depression, that somehow it's gonna be a mark against them. We have to do more about addiction. Not only drugs but also alcohol," Clinton said.Clinton, meanwhile, repeated "it was a mistake" to have used a personal email account and server while leading the department, and that she would "certainly not do it again."

"I make no excuses for it," she said.But Clinton defended certain emails, including those that contained information about the country's covert drone program, as not revealing classified information.

"There were no discussions about any of the covert actions in process being determined about whether or not to go forward," she said. "But every part of our government had to deal with questions, secretary of state's office was first and foremost, so there are ways of talking about the drone program."